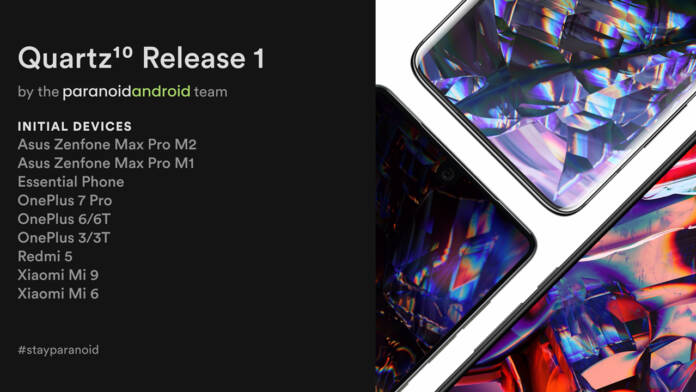 The idea of custom ROMs don’t meet the same response from everyone. If you’re an Android buff who doesn’t mind taking the leap, Paranoid Android, a seasoned team of aftermarket firmware developers, has released stable ROM builds based on Android 10 for a few handsets. More devices slated to join the league soon. This is Paranoid Android’s first stable build since Android Nougat. Yes, they had Oreo and Pie but those never managed to thrive beyond alpha and beta stages.

It’s after a long time that Paranoid Android has a new stable ROM build. Better late than never, this is a reminder for everyone who had counted the team out for the likes of LineageOS, OmniROM, Pixel Experience et al. They are still going strong and this is evident from the release of Paranoid Android ‘Quartz 1’ for nine devices including Xiaomi Mi 6, Xiaomi Mi 9, Redmi 5, OnePlus 3/3T, OnePlus 6/6T, OnePlus 7 Pro, Essential Phone and the Asus Zenfone Max Pro M1/M2.

If you own one of the abovementioned devices, you’d be wondering what the Quartz brings to the table. There is an entire list of features on Paranoid Android, but to run through some, it’ll include April security patch, adaptive playback, built-in screen recorder, support for in-display fingerprint reader, fast charging indicator, and a ‘pocket mode’ that identifies when phone is in the pocket and prevents it from waking.

Quartz 1 builds can be downloaded for these devices from their respective XDA forum threads right away. Paranoid Android informs that all these builds have Google apps included. You are not required to flash a separate ZIP file for the Play Store. The team is finalizing a roll-out of Quartz for a few more devices – OnePlus 5/5T, OnePlus 7/7T, and 7T Pro, Pocophone F1, Sony Xperia XZ2/XZ2 Dual, Sony Xperia XZ2 Compact and XZ2 Compact Dual, Sony Xperia XZ3 and XZ3 Dual, Xiaomi Mi 9T and Redmi K20, Xiaomi Mi 9T Pro and Redmi K20 Pro. It should be available for these smartphones in the coming weeks.