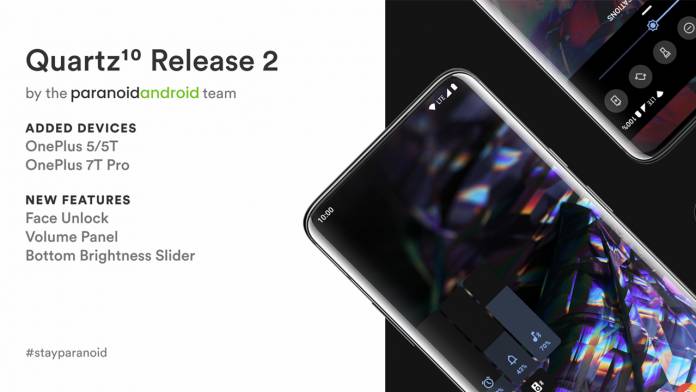 If you have already downloaded the custom ROM released by Paranoid Android a few days back, this news is going to get you on your feet. The first stable Android 10-based Quartz 1 has its second version rolled out. The team at Paranoid Android has released the Quartz 2, which brings a range of new features to the table. Alongside this, the new version reportedly fixes the screen recording crash issues which users face in Quartz 1.

According to the latest update on Paranoid Android blog, the new release brings four features to the compatible devices. These include Face unlock, new volume panel, status bar brightness slider, and additional support for single tap to ambient display (this is available for devices with kernel support for it).

The first version of the Quarts among other features included support for built-in screen recorder, which reportedly crashed during use. The new version brings along the fix for the crash on-screen recording. Quartz 1 had rolled out for nine handsets including Xiaomi Mi 6, Xiaomi Mi 9, Redmi 5, OnePlus 3/3T, OnePlus 6/6T, OnePlus 7 Pro, Essential Phone and the Asus Zenfone Max Pro M1/M2. The second version of the build brings support for another three devices. These are the OnePlus 5, OnePlus 5T, and the OnePlus 7T Pro.

While Paranoid Android is working on extending support to more devices, it informs that uses who have the Quartz 1 build running on their devices should automatically receive the Quartz 2 update in the coming days. Others who are willing to try the new stable ROM build can download it for their devices from respective XDA forum threads right away. The builds have Google Play included. No need to flash a separate zip for it.