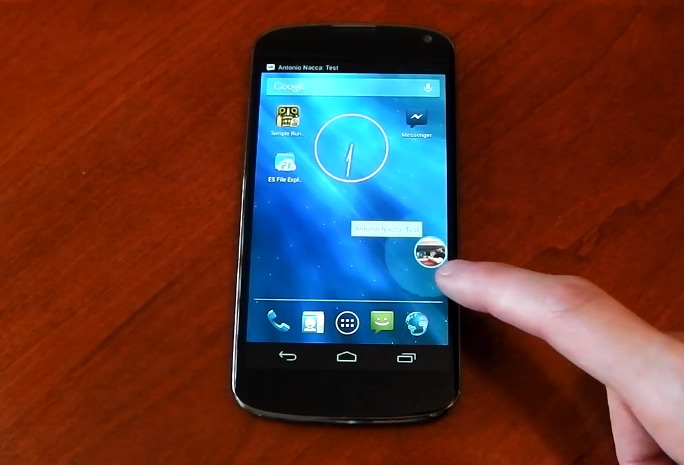 Earlier this week the news brought some exciting new developments in the world of Custom ROM’s for Android using a few of Facebook‘s latest features. Most notably, the Chat Heads messenger system. Many love the feature, but don’t want to use Facebook. That’s where Paranoid Android comes into play. We detailed this earlier today, and now have a video of their awesome new feature in action.

At first we thought they’d be bringing the multi-window and multitasking Chat Head feature for Android for messages, but they took the awesome design behind it and expanded it to everything. The more I watch this video the more excited I get to try this awesome new feature. They are calling it HALO, and it even has a nice HALO effect when notifications arrive.

Essentially this is a notification box that works system-wide for everything. Regular notifications, email alerts, Twitter updates, Facebook messenger alerts, SMS, you name it. Everything is unified into one chat head and completely manageable. You can still access the notification pull-down bar, but why do that when you can get the little Chat Heads circle and popup window over what you’re currently doing. Respond and it goes away. Truly awesome multitasking. Watch and see:

Like what you just saw? Yea, me too. This is our first official look at the brand new feature coming to the popular Paranoid Android ROM’s, and probably many other custom ROM’s in the very near future. They are calling it HALO, and we’re big fans already. As they say in the video this takes notifications and multitasking, blends them together, and puts them on steroids.

Looking good so far, especially for an early beta version. We’ll update once this finally gets released to the public. Do you guys like it?