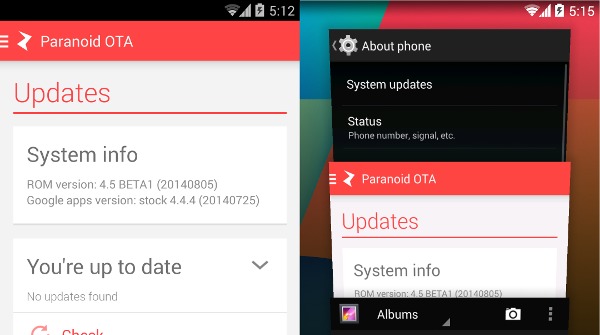 That was fast! Barely a week after 4.5 Alpha 3 was released, Paranoid Android is letting Beta 1 out of its cage. While this release contains mostly fit and polish on the redesigned Recents view, this version is important beyond the changes that it contains. It practically gives the signal that the new Recents is ready for prime time and will soon be available from the custom ROM’s stable images.

PA’s new Recents brings a foretaste of Android L aesthetics to the Android 4.4 version that sits cozily in the ROMs stable versions. PA developers have been iterating over it with the passion of a burning sun, releasing a new alpha almost every week. This release is no different from the others that it polishes up Recents, improving stability and fixing bugs, particularly one related to the “clear all recent apps” functionality.

Of course, there are other changes in this release unrelated to Recents. A patch to Google bug #13678484 was introduced. This “Fake ID” bug was a recently disclosed security vulnerability that would let malicious software masquerade as a legitimate app because Android does not check the chain of custody when it comes to identity certificates. Unrelated to security, a new patch also adds what PA itself calls “long-overdue” support for its own custom features into Android’s multi-user feature. And of course, and you might be tired of hearing it already, Paranoid Android has synced its Theme Engine to the latest changes found in upstream CyanogenMod.

PA 4.5 Beta 1 represents a milestone in the ROM’s development, as its new Recents feature has reached a point of stability. Though marked as “beta”, the version is practically stable given the minimum number of disruptive changes involved outside of Recents. It will be interesting to see how quickly this beta period will end given how fast they’ve been releasing alphas. But perhaps it will be even more interesting to see what PA has planned next after this.