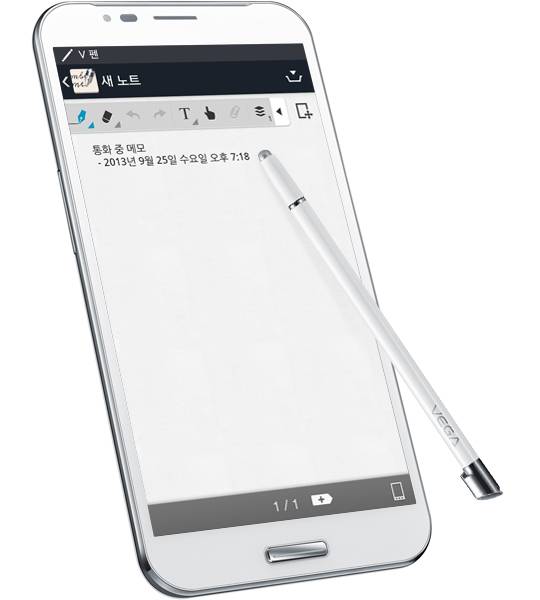 Just yesterday, we got hold of some leaked photos of the upcoming Pantech Vega Note. That smartphone has become official today and we’re discovering that the stylus-enabled Pantech Vega Secret Note sports some rather intriguing features indeed.

It is unsurprising that the Pantech Vega Secret Note runs on a quad-core Qualcomm Snapdragon 800 processor. However, it comes with a RAM size of 3 GB, which is not that common but is quite in line with its rival, the Samsung Galaxy Note 3. And indeed, this device also sports an almost similar looking stylus which Pantech calls, unsurprisingly, the V Pen. The Vega Secret Note does sport a larger 5.9-inch display that still keeps the 1920×1080 Full HD resolution. It sports a 13 megapixel camera at the back and a 2 megapixel one on the front. It has 32 GB of storage but, quite surprisingly, also has USB host mode right off the bat, giving it access to external storage capacities of up to 2 TB.

Of course, the Pantech Vega Secret Note’s utterly long name would be useless without its special privacy and security features. As seems to be the fad these days, the Vega Secret Note has a fingerprint sensor on its rear. But aside from simply unlocking the device, it also serves as a way to reveal a hidden set of data such as phonebook entries, photos, videos, music, and others. The smartphone also some other interesting features such as LTE-A support, TV viewing via Korea’s DMB technology, and a custom tile-based homescreen launcher that looks quite similar to some other mobile operating system.

There is no information on date or carrier availability yet, but the Pantech Vega Secret Note is said to be priced at 900,000 won, or around $840. The smartphone also has a cover accessory that sports a small window where you can use the stylus to write notes on the smartphone, similar to what Samsung also has for its own stylus-enabled phablet.