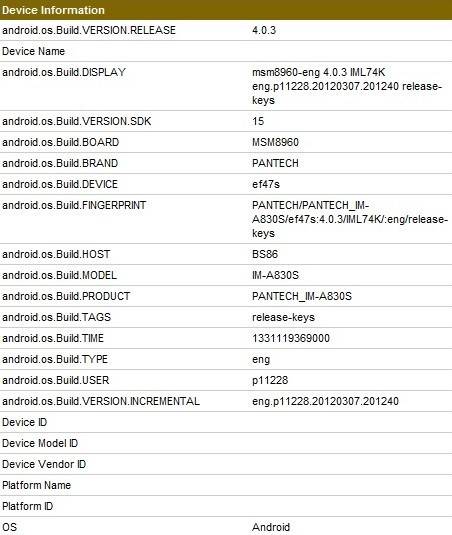 Here’s an interesting one for your morning Android news digest: a high-end Pantech phone has leaked out in a series of pre-release sordid details. The IM-A830S doesn’t have a proper name just yet, but it does have a series of impressive specifications, starting with Android 4.0.3 loaded at launch – whenever that is. Blog of Mobile spotted the phone sitting in a benchmark pool along with a series of impressive hardware specifications. While this shouldn’t be considered any sort of confirmation, it’s a definite indication of exciting things coming out of Pantech.

First and foremost is a Qualcomm Snapdragon S4 processor, which according to the model number (MSM8960) runs 1.5Ghz on dual cores. Other features include a 720p screen of unknown size, though it includes Ice Cream Sandwich’s virtual navigation buttons, and an LTE radio that seems tuned for LTE on SK Telecom in South Korea, Pantech’s home territory. There’s no word on a release date, proper name or even a glimpse of what this one looks like, though that’ll probably come along sooner rather than later.

Pantech is known for low-end phones in most markets, but it’s released some respectably powerful hardware in South Korea before, like the Vega LTE. Between its expansion into the tablet market and aspirations towards North America, it’s not impossible that we could start seeing more varied devices crossing over into other markets. That said, the company seems hesitant to get its flagship phones out of the home territory at the moment. We’ll just have to wait and see.