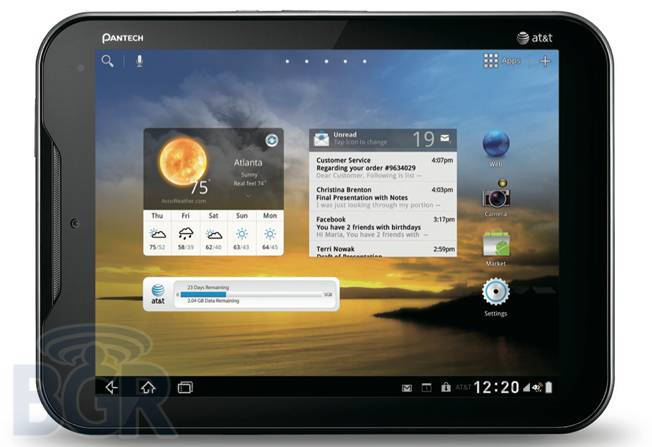 The latest addition to AT&T’s tablet range comes from an unlikely source. Pantech, previously happy enough to make cheap smartphones, will be releasing a surprisingly novel Honeycomb tablet with AT&T LTE connectivity in just a few days. According to BGR, the Element also includes basic waterproof specification. You get some fairly standard specs including an 8-inch screen running the latest version of Honeycomb for just $299.99, which makes the new tablet the cheapest available on AT&T.

The tablet is rated as IP57 waterproof – basically it means you can set the tablet next to the sink while shaving or doing dishes without having to worry, but you shouldn’t try dunking it in the pool. For the price you get some respectable innards, including a 1.5 Ghz dual-core processor, 16GB of storage and a 5 megapixel 1080p camera.  Based on the image, the screen looks like a 4:3 model, most likely 1024×768 resolution like the iPad and HP TouchPad.

The Element’s $299 price naturally necessitates a 2-year service agreement, but you can get it for a surprisingly affordable $449.99 without commitment. The only other tablet on AT&T that’s anywhere close to that price is the Acer Iconia Tab 501, which lacks real LTE connectivity. The tablet itself seems to be running a slightly tweaked version of Honeycomb, with the standard (unnecessary) additions of custom themed icons and widgets. We’ll be interested to see how the Pantech Element stacks up to the competition next week.