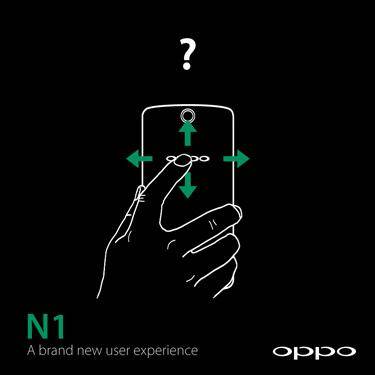 Popular Chinese electronics manufacturer Oppo has confirmed anew that its next device, the N1 camera smartphone, will indeed have backside touch controls. This time, it is putting a twist to its announcement, asking its Twitter followers what to call this panel.

The Oppo N1’s journey towards unveiling is almost at an end, but it seems that its manufacturer hasn’t completely settled down on its marketing spin. Last week, Oppo teased the public with some amusing ads hinting to rear controls on the device. They aren’t exactly the first one to pull of such a stunt. As mentioned in our hands-on, the LG G2 sports backside touch-sensitive volume controls and an actual power button. On the other hand, Oppo seems to be pointing out that the N1 will have a full rear touch panel. And now it’s asking the public what cool name to give this feature.

The Oppo N1 won’t exactly be offering anything else that’s new. It is expected to come with a Qualcomm Snapdragon 800 running at 2.3 GHz, 2 GB of RAM, and a 5.0-inch 1080p display. As a camera-oriented smartphone, it is said to have either a 12 or a 16 megapixel camera, Xenon flash, and Oppo’s “Owl” technology for better photography in low light situations.

A full touch rear panel and a catchy name might just be what Oppo needs to draw the crowd’s attention. And do that, it must, as it will be standing head to head with other giants vying for people’s attention when the Oppo N1 is unveiled next week.