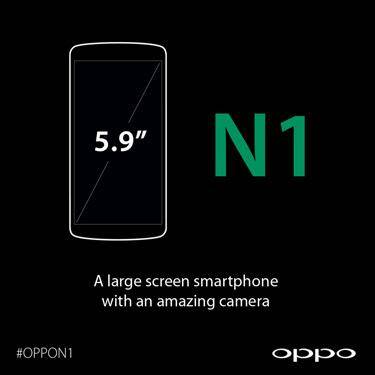 Details of the OPPO N1 had been circulating in rumor form, however it looks like OPPO has since taken over the teasing. Granted, that doesn’t mean we expect the rumors and leaks to end, but it does mean some official information is being revealed. Just yesterday we saw a bit about how the N1 was going to arrive sometime later this year and well, it now looks like we have a date and also some details in terms of the display size.

Coming by way of the official OPPO Twitter account, the company has let everyone know the N1 will be announced on September 23 and that we can expect “big things.” The big things portion deals with the size of the display, which as was shown in the image — will measure in at 5.9-inches. OPPO hasn’t offered anything in terms of the resolution, nor have the offered much more in terms of the camera.

The only other bit of teasing that came along with the display size was a bit about how the N1 will be a “large screen smartphone with an amazing camera.” In keeping with the rumors, the OPPO N1 is expected to arrive with a 1080p display and 12 megapixel rear-facing camera with a Xenon flash. Of course, we should offer the reminder that theses two details have yet to be confirmed.

In other words, nothing is official until we hear it direct from OPPO. And just to show how rumors can sometimes change, earlier details were suggesting the N1 display would measure in at 5-inches. Needless to say, given the size of the display we would be surprised if it didn’t arrive with a 1080p resolution.

Aside from the N1, OPPO had also dropped a comment about the Find 7 the other day. While that handset is expected to arrive as a follow-up to the Find 5, it looks like it will be quite some time before that handset arrives for purchase. In fact, coming by way of the OPPO Google+ page, the Find 7 isn’t planned until “late next year.”