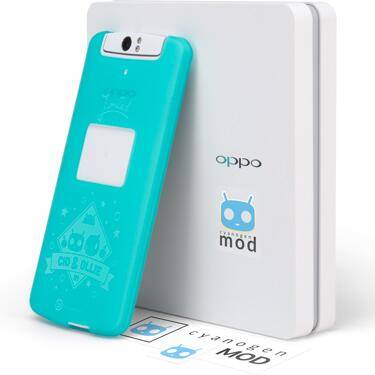 There had been talk of the OPPO N1 CyanogenMod edition shipping internationally from late-December. And well, it looks like a specific release date has been announced. Coming by way the official @OPPO Twitter account, we now know the handset will be available for purchase beginning on December 24th. Along with the release news, there was also a sneak peak given at the packaging and a bit about the Google certification.

The OPPO N1 CyanogenMod edition has made it through the Google approval process. This essentially means the N1 is now Google CTS-Certified, with CTS standing for Compatibility Test Suite. Along with mention of the approval, this also marks the N1 as the first handset running CyanogenMod to gain that approval.

There was previous talk of the CyanogenMod N1 coming with some extra goodies and thanks to the image shared by OPPO, we have gotten a bit of a look at what can be expected. In the above image you will notice the special CM branding packaging as well as the stickers and case. As would be expected, the case has the appropriate access for the rotating camera and the O-Touch pad on the backside of the handset.

Abhisek Devkota, aka, ciwrl, shared a bit of detail with his thank you post on the CyanogenMod-Dev Google Group. According to Devkota, the OPPO N1 will be running CyanogenMod 10.2 and it has officially passed Google’s CTS and CDD certification programs. Further comments here touched on how there was only one issue hey had to make adjustments for — root access.

“Aside from root access, we were not forced to make any compromises in terms of features or functionality (even the theme engine passed – no small feat considering it was rejected from AOSP).”

That all being said, the handset will be available on December 24th, however we have yet to see anything in terms of pricing. We do know the non-CyanogenMod edition of the N1 is currently selling for $599 (16GB) or $649 (32GB). And lastly, it was said the CyanogenMod OPPO N1 will be a limited run.