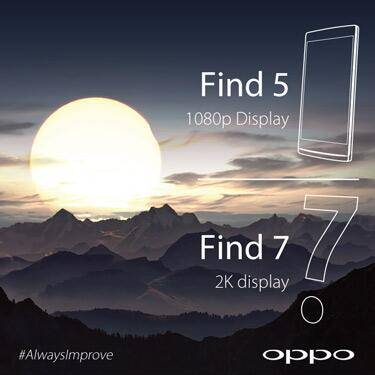 We must be nearing an unveiling date now that OPPO is slowly starting to spill details of the OPPO Find 7 over the Internet. Confirming an earlier leak, the smartphone is teased to indeed have a 2K display but the real size of the screen is pretty much still a big quesiton mark.

It will not be a a 5.7-inch smartphone nor will it be a 7-inch tablet, at least according to International Markets Manager Carl Pei. That leaves us with a lot of possibilities as to what the 7 in the name really stands for. In its latest teaser, OPPO claims that the OPPO Find 5 was the first smartphone to have a 5-inch 1080p display, but the Find 7 is left as a question mark shaped liked a 7. It does mention a 2K display, probably with a 2560×1440 resolution as previously rumored.

The other pieces of the Find 7 puzzle are also based on rumors. It is said to house Qualcomm’s latest Snapdragon variant, the Snapdragon 805. Among other things this quad-core chip is capable of is running at 2.5 GHz and 4K video capture and playback. The rest of the specs read like a lot of other high-end smartphones, with 3 GB of RAM, a 13 megapixel rear camera, and a 5 megapixel front-facing camera.

The tweet teasing the OPPO Find 7 does say it will be taking one step further, which could also be interpreted as one inch bigger than its predecessor. We’ll just have to keep on guessing until OPPO lets out another clue or, better, finally reveals the device.