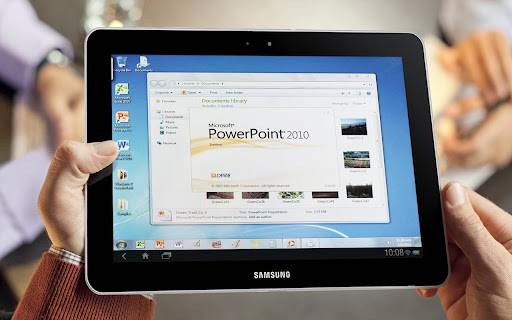 As surprisingly utilitarian as Android tablets are becoming, there’s still a few things you’ve just gotta have a desktop for. Or do you? OnLive already allows access to top-of-the-line PC gaming over the Internet via its remote service, but the latest addition to their service is aimed squarely at getting some real work done. OnLive Desktop works a lot like is gaming service, but instead of a PC game you get a real live Windows 7 desktop, virtualized across the web without ever needing to touch your own PC. The best part? The entry-level version is totally free.

OnLive is combining a couple of very old software technologies to do this: virtualization and remote access. First, the company sets up a virtual machine on its server, a copy of Windows running completely on software and likely next to hundreds of copies of itself. Next it establishes a remote connection with your Android tablet, then gives you control of the cloud-based Windows machine running inside its server. It’s a lot like setting up a remote connection to your own PC, without the PC.

Naturally they aren’t doing this out of the kindness of their hearts. The basic version isn’t useful for much, with access to Microsoft Word, Excel, PowerPoint and Adobe Reader, plus 2GB of remote storage. Upgrade to the $4.99 a month plan and you get accelerated speeds and a full Flash-enabled web browser. The $9.99 Pro version adds another 50GB of cloud storage and the ability to load your own programs onto the virtual machine. OnLive Desktop Plus and Pro are not included in a subscription to OnLive’s gaming service.