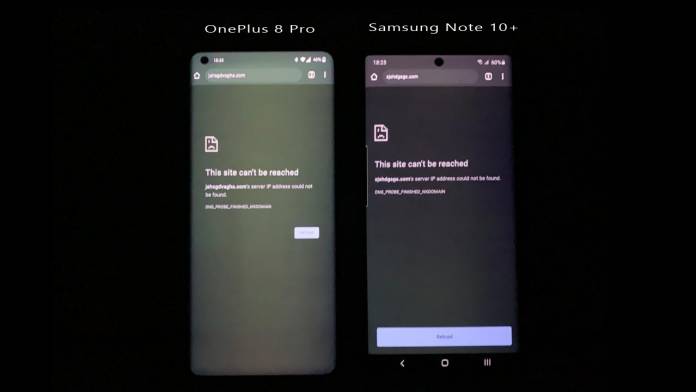 OnePlus 8 Pro is a flagship in its own rights as far as pricing and specs go. The most anticipated phone of the year is available for sale in the UK and Europe since April 21 and is slated to release in the US on April 29, while pre-orders are already reaching buyers. For those who have got their hands on the device, there are some concerning issues with the display that are making headlines. Case in point, green tint screen issue at low brightness levels, crushed/clipped blacks, short-term image retention, and lines appearing around the front punch-hole camera.

People who are experiencing these issues in OnePlus 8 Pro have voiced their concern on the OnePlus forum and the company has responded to the users by saying “Our team is currently investigating these reports to identify the best solutions for our users, and we will issue updates as soon as they are ready. Regarding the green tint, we are working to resolve this in our next OTA.”

So the users should expect the green screen fix in the next update while OnePlus still hasn’t confirmed the other reported issues. While the screen uniformity at low brightness or dark themes are a part of the OLED panels, which other phones like iPhone 11 Pro Max are also affected by, so practically there’s no workaround that problem.

As a temporary fix for the green tint issue, try and switch on the DC Dimming settings which forum users have said fixes it for the time being. To turn the option on, go to Utilities – OnePlus Laboratory – DC Dimming – On. It’s not only the high-end OnePlus 8 Pro that’s encountering speed bumps just when it is fresh, even Galaxy S20 Ultra has been bugged by screen issues as reported by users.