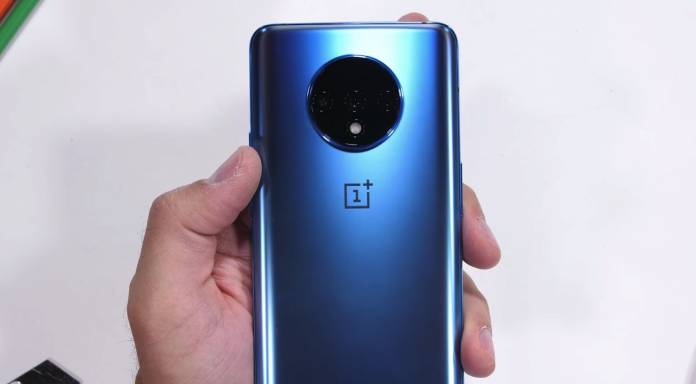 The OnePlus 7T and OnePlus 7T Pro officially launched a few weeks ago. We said the Pro version wouldn’t really make OnePlus 7T buyer jealous because they are almost the same. The phone is the first to ship Android 10 out of the box and is a more powerful phone despite its smaller form factor. A OnePlus 7T McLaren will roll out soon but in the US, we know the OnePlus 7T is a T-Mobile exclusive. The device has recently landed on the hands of Zack Nelson and you know what that means, either a teardown or a durability test.

The OnePlus 7T really is an improved OnePlus 7 Pro. If you think the 7 Pro is good enough, the T variant is better. It’s different though because of the new round camera module and the absence of a pop-up selfie camera. The Chinese OEM simply decided on a waterdrop notch.

The standard durability test starts with Zack scratching the screen. As expected, the phone still has a screen protector. The second scratch test has revealed what we already know: scratches at level 6 with deeper grooves at level 7 on the Gorilla Glass 6.55-inch AMOLED screen with 2400 × 1080 pixel resolution. The selfie camera is also covered by the same display.

Scratching the speaker grill on top has revealed it’s only made of plastic. The sides’ material is anodized aluminum so it scratches. The headphone jack is still absent. On the side, you will notice the triple sliding mute switch that makes unlocking or putting the device on silent is convenient.

Under the heat, it takes about 25 seconds before the screen shows a faint burn mark. It’s actually impressive and the phone really appears to be solid even after the bend test. The OnePlus 7T cracked though in the center but there is no permanent damage. The glass back is just damaged but the front screen works.