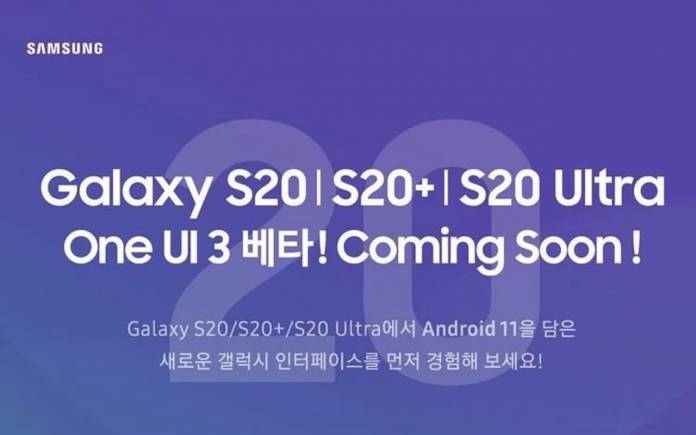 The One UI 3 Beta Program for Devs has started for those in the United States and South Korea. It was opened for the developers so they could start working on the changes and enhancements they may apply. Some Galaxy S20 units may soon receive the One UI Beta 3.0 and with it comes Android 11. More Galaxy devices are expected to release the same version once ready from Samsung. The beta version’s changelog has been shared here before.

The public beta version of the One UI 3.0 for the Galaxy S20 phone will be released soon according to Samsung. It will be ready for all three phones: the regular Galaxy S20, Galaxy S20+, and the Galaxy S20 Ultra. Specifically, it will be available first in its native country–South Korea.

If you are interested to check out the build, you may sign up for the program at the Samsung Members app on your Galaxy S20 phone. The release date and the official download link will be posted on the mobile app. It is highly encouraged that you get and use the Samsung Members app because the company posts important information and links there.

There is no word when the beta program will be opened for those in India and Germany. It will be ready soon for those in the United States. It can be assumed the Galaxy Note 20 will soon be part of the One UI 3.0 beta program.

To review, the One UI 3.0 update offers improvements to the camera system. It will include better stabilization and autofocus. One UI 3.0 will also bring weekly trends for Digital Wellbeing, separate profiles for work/personal profiles, lock screen widget, time spent on calls while driving, trash bin feature for messages, call screen customization, improved Calendar and Reminders apps, and the ability to delete duplicate contacts. One UI 3.0 also brings changes to the Samsung Keyboard and Wireless DeX and a newer version of Samsung Internet.