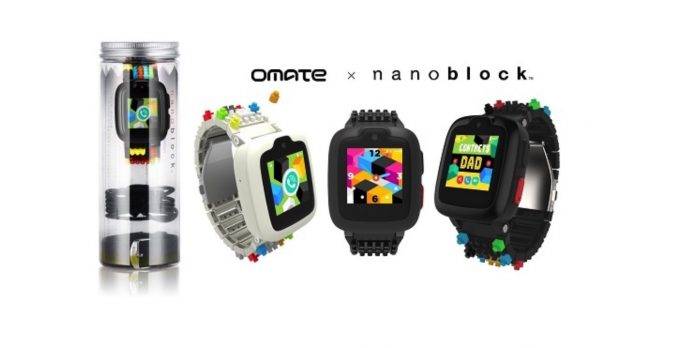 Omate is known for coming up with useful smartwatches since 2014. The first model, the Omate X companion smartwatch, promised a week of charge. There’s the Lutetia that was the first smartwatch exclusively for women. Two new affordable circular smartwatches were introduced the following year plus two new TrueSmart-watches. There’s also the Lollipop-powered Omate Rise as the world’s first Smartwatch 3.0 device. The standalone smartwatch was made available in a 48-hour crowdfunding campaign. The Omate S3 Seniors Smartwatch and the Omate Rise Carbon Fiber Limited Edition were also present.

For the kids, there’s the Omate Wherecom K3 Smartwatch announced at MWC 2016. That was a couple of years ago and now it’s about time the K3 gets an upgrade in the form of the Omate x Nanoblock smartwatch. This one seems to be a fun idea because kids and parents alike can spend time and unleash their creativity with the Nanoblock. The Lego-like system is actually smaller so the blocks are also smaller.

Tata Communications will show off the smartwatch at the upcoming Mobile World Congress. The Omate group is serious about this design that can also help parents in entertaining the kids and teaching them a thing or two about time management, hard work, and not forgetting to have fun.