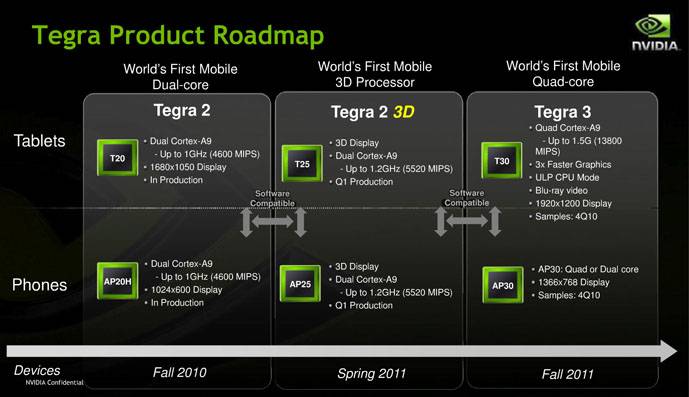 Having seen a 3D-related section leak earlier, the remainder of NVIDIA’s 2011 roadmap for mobile processors has emerged, and it’s not just three-dimensions that the company is considering. According to the document – believed by Bright Side of News to have been prepared for MWC 2011 next month – NVIDIA expects to begin sampling the Tegra 3 SoC in Q4 2011, with two versions suiting tablets and smartphones respectively.

The Tegra 3 T30 is headed to tablets, promising up to four 1.5GHz ARM Cortex A9 cores along with support for Blu-ray video and capable of driving a 1920 x 1200 panel, with 3x faster graphics and an ULP (Ultra Low Power) mode. Meanwhile the Tegra 3 AP30 is for phones, with either dual- or quad-cores, and capable of 1366 x 868 resolution displays.

Both mean super-high resolution slates and handsets are possible, and both are expected to sample by the end of the year and then likely show up in new products come CES 2012.