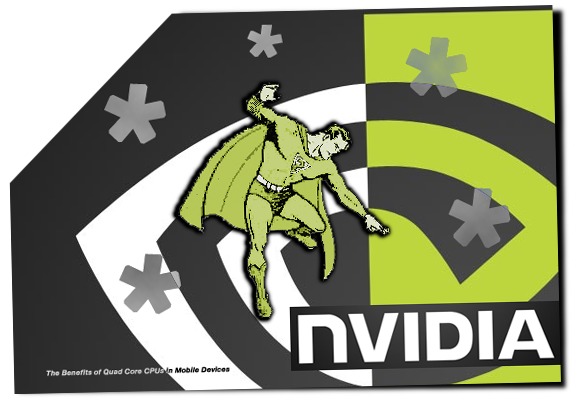 The next revolution in the mobile market it almost here, and that is quad-core processors. We’ve heard tons about them in the past and are about to here plenty more in the future. Today NVIDIA is shedding some light into their world of quad-cores, project Kal-El, and even broke some news about a fifth core — yes we said fifth as in five. Would we call that a quin-core processor?

NVIDIA today has added some details giving us a more in depth look at Kal-El quad-cores as well as everything else you’d possibly need to know with a pile of white papers full of useful information. The addition of a fifth stealth-core to help save on energy, and the amazing levels of power efficiency we will be seeing with their quad-core processors that are coming soon. It also looks like 1080p is a thing of the past, with Kal-El and future chips offering 2560×1600 HD video and more. With that high of resolution support I’m excited to see what Kal-El will offer in terms of 3D video output, as I’m sure a few will be excited to give that a try with some 3D gaming or video playback.

Today NVIDIA unveiled that project Kal-el will have something called a stealth-core that is a fifth processing core that will save on energy, keeps things efficient, and pop up to do some tasks only when its needed and let the big guns sleep until their numbers are called. Everything is right here in the NVIDIA white papers. Basically during those daily tasks that are lightweight such as music playback, e-reading, and YouTube watching Kal-el will completely power down all four cores and activate the single companion stealth-core. For higher performance tasks, Kal-El disables its companion core and turns on its four performance cores, one at a time, as the work load increase. Instead of sucking power with all four cores all the time NVIDIA plans to operate in a highly efficient system.

The second whitepaper by NVIDIA details how as crazy as it sounds, quad-core Kal-El uses less power than dual-core processors across all performance points, and even less than single-core processors too. Instead of overloading any single or dual chips Kal-el is able to efficiently and evenly distribute the brute workload and this causes an overall environment that consumes less power.

With faster browser rendering and load times, stellar benchmark performance and multi-threading and more the power of Kal-el aims to impress. Below is a view of Coremark comparing many current dual-core processors and it shows Kal-el performing quite impressively. Delivering over two times the performance of dual-core processors all while using less power is a pretty big task, and NVIDIA seems to have nailed it. 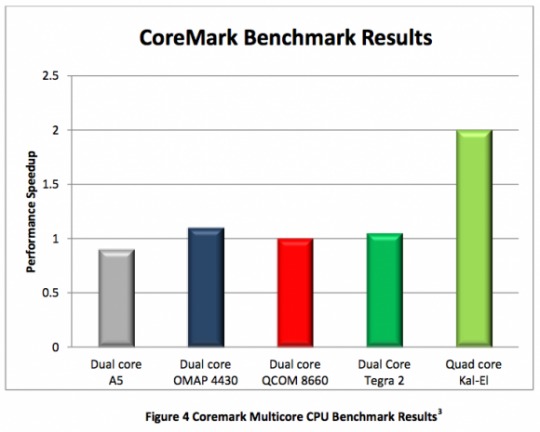 What all this means in the Android tablet and smartphone world remains to be seen. The last leaked roadmap from NVIDIA showed us Kal-El and Kal-El+. I’m wondering if the + will be an even more efficient platform that they’ll use for quad-core smartphones. For any and all details regarding NVIDIA feel free to hit the portal button up top or just click here.

I’ll ask you guys the same thing NVIDIA asked us. So, does a quad-core processor that outperforms other processors while using less power appeal to you?