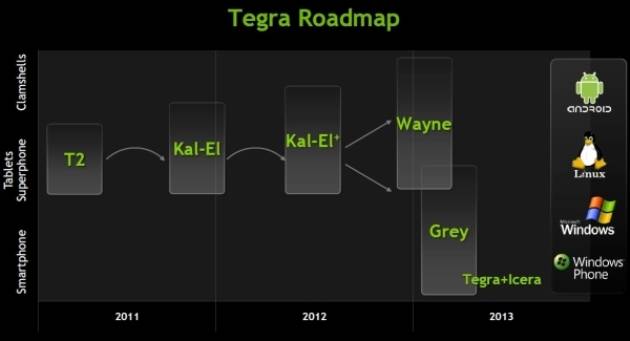 NVIDIA and their Tegra 2 superchip for phones and tablets has been on a roll lately, with all the recent talk about quad-cores and Kal-El things are about to get even better this holiday season. Over the weekend a leaked roadmap showing a few us NVIDIA’s upcoming plans and chips may have leaked and it shows us plans up to 2013. One interesting thing I noticed is Kal-El+ on the chart for 2012.

Just last week we heard quad-core Kal-El chips were slightly delayed but we would still see tablets this year with the powerhouse CPU inside. Like recent names of NVIDIA desktop CPU’s Kal-El+ will probably be a more refined and efficient version of their first quad-core chips, but more efficient and aimed for android phones sometime in 2012.

Next on the list we are already seeing possible successors to Kal-El coming late 2012 and early 2013 with support for not only Android but also Linux, Windows 8, and WP7. Interesting to note if we are reading it right NVIDIA doesn’t plan to support Windows until 2013. That can’t be right can it? According to the roadmap it also appears that Kal-El+ will power both smartphones and tablets and then mid to late 2012 NVIDIA plans to split up into different divisions for their CPU’s.

Showing project “Wayne” for tablets and superphones, then project “Grey” will be for mass consumption and a more standard mid-range smartphone market rather than the high end. Grey will take use of NVIDIA’s recent acquisition of the 3G/4G wireless modem company Icera and will be an all in one SOC (system on chip) solution for most smartphones by the end of 2012 and into 2013 to compete with the likes of Qualcomm.

Hopefully we will learn more on Kal-El+ in the comings months and what NVIDIA has planned for the future with Wayne and Grey. The map is a bit confusing and lumps those last two together in the middle so it seems they are still a bit unsure as to what the future holds. Then again aren’t we all?