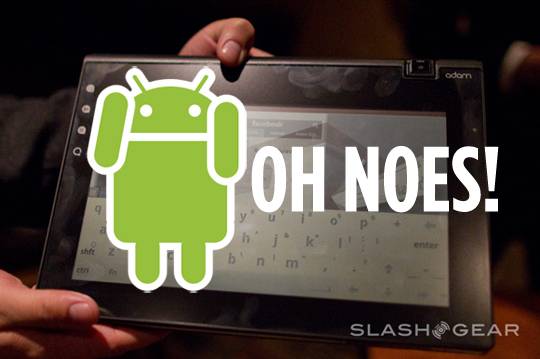 It appears in more than one case today that Notion Ink’s General Terms of Return for the Adam Android tablet are coming into the spotlight in a rather unpleasant set of instances. As you know, hardware/software brand Notion Ink recently sent out their first shipment of Android tablets, that being the several different versions of what’s called the “Adam.” Since shipment, there’ve been several reports of difficulty in use, mis-information coming to light regarding the glossiness of the screen, blotchiness in the colors on the screen, and now a hardware mis-alignment in the swivel camera at the top of the device. A fellow by the name of Rambler reports today that after reporting to Notion Ink that his device suffered from the last two items from this list of defects, he was treated with what seemed to be a dismissive attitude and a confusing set of instructions, ultimately leading up to his 7 day return period becoming expired.

The story of Rambler, (otherwise known as Rambler358 on the NotionAddicts messageboard,) begins with his shipment coming to his Los Angeles door all the way from Xiamen, Fujian China. His first problem began when he attempted to apply the screen protector included in every Adam package:

Got home about an hour ago and decided to check out my Adam. Got everything unboxed, and all was okay. I decided I wanted to put the screen protector on the first thing. I’m here to tell you it’s no easy thing getting the screen protector on! It needs to be aligned perfectly, or else the protector won’t fit correctly. Needless to say, I borked the installation by not having it aligned just right. After taking it off once to try and realign, some dust specs got in. And then it still wasn’t perfectly aligned, and the edges don’t want to seal themselves. So I got the scissors out, and trimmed away some of those parts that wouldn’t seal. After 45 minutes I got it to be as best I could, with at least no bubbles or specs over the screen portion. But I hope more screen protectors can be ordered, as I really want to do this again and get it perfect. But it looks just “okay” as it is now.

After this, he turned the tablet on and found there to be a 19% charge, the tablet telling Rambler that he needed to charge the device asap. He plugged the device in and started to search for the supposedly included PDF manual to no avail. Next he tried to enter his Wifi info but the keyboard did not appear without him exiting connection preferences and activating the Adam keyboard separately. Then he could not figure out how to turn the Eden OS off. Eventually he found one place – above the last used apps section, that worked for a two-finger swipe down to exit into desktop mode. Then the Facebook app didn’t work in any mode, and the tablet was stuck in landscape mode, and the Help file opened into a non-existing link.

It was then he realized that his camera “would not stay all the way down in front,” apparently popping up slightly like it was spring loaded. Filing this issue aside for later, Rambler noticed “some un-evenness in the colors on the display,” but as it appeared to change depending on the angle the screen was viewed at, he filed this issue away as well. Next he realized that although the screen protector was attracting a massive amount of fingerprints, he couldn’t remove the protector for fear that Notion Ink might not be producing more, as they’ve given no report on the subject.

When holding the device in landscape mode, Rambler noted that it was very easy to accidentally hit one of the buttons, especially since none of the buttons light up. Of course then Rambler remembered that there was no Android Marketplace on the tablet, and that although he purchased the PQ display version of the tablet, he found himself unimpressed with it, having to take it outside into the sunlight to “really see its merits.”

At this point, Rambler took the camera issue back out of the back of his mind because not only was the swivel on the hardware acting goofy, the camera as it appeared on the screen was defective as well. When booting the camera up, Rambler saw a brief black screen with colored diagonal lines, then a blank screen altogether.

Then he took the screen issue back out of the back of his mind as he realized that the screen was downright blotchy. The Pixel Qi screen both whilst booting up and during dark scenes in movies. It was at this point that Rambler sent in a note to Notion Ink customer support asking for help.

Their response was less than helpful:

Try pressing volume up and power button, enter recovery mode and wipe your data, then restart.

The first thing to note here is their complete disregard for the camera problem, as it is a hardware problem and has nothing to do with a reboot of the system. Furthermore, Rambler did end up trying this method for fixing all of his problems – to no avail. Rambler sends in another mail suggesting that they respond to the camera hardware issue as well as the fact that the whiping of the system fixed none of his problems, only to receive the following reply:

Please send us some photographs so we may look and respond back to the issues you are facing.

At which point Rambler began to suspect the worst, that Notion Ink was taking him for a ride, so he replied:

I responded back again asking how would sending pictures of a defective camera help resolve a camera that can’t take pictures/video issue? I then stated I’d like to do an advance exchange, and if they weren’t able to do that, then I just want to return my defective Adam for a full refund.

It seems like NI is trying to extend out this process for as long as they can past 7 days, so that I’d have to pay some fee or something. It’ll be interesting to see how this plays out.

It’s at this point that Rambler receives another response disregarding the camera hardware issue, replying with the following:

With respect to the screen what you see on the right side is the trans-reflective property. As the contrast ratio on a Pixel Qi screen is less as compared to a LCD screen for this reason the light bounces back and what you see is the white light.
This is not a defect of the screen.

This does not please Rambler, as the blotchiness he had been experience was showing up every time there was a dark or otherwise black scene on the device, so he responded again with a request for an advance replacement or a complete refund for his defective Adam.

It’s at this point that he’s received a large amount of replies from the other Notion Addicts who suggest he work with the Better Business Bureau (BBB, which of course wouldn’t work since Notion Ink isn’t in the USA or Canada,) and to call their toll free number. It is then revealed that this toll-free number was only printed once in a “way too early release of their paperwork” and was a filler number: 1 800 123 4567.

At this point it is several days after Rambler’s tablet has been shipped. At this point, the following bit of legal text from Notion Ink’s CancellationReturnRefund file:

Rambler is now not having a very pleasant experience, and notes the following:

At this point, I don’t even care about the screen anymore. It’s the camera that’s really defective. Here are the camera issues I’m having with my Adam:
– First, it does not lock down in the front and pops up slightly.
– When running the camera or video I briefly get a black screen with horizontal lines, then goes immediately to a black screen with no picture/video taking ability.
– While in camera or video mode, I can hear a faint clicking coming from the camera when I hold my ear close to it.

I explained the above to NI support, with the secondary issue of the PQ screen’s blotchiness on the right hand side. Support didn’t respond back regarding the defective camera issue, but just defended my screen issue. I’m going to wait and see how support responds to my latest email to them indicating (again) that the defective camera is my primary concern.

At this point I think I just really want to return it for a full refund and get the Moto Xoom next month.

Another Adam purchaser (named Mada) tells Rambler that he (or she) had also purchased the Pixel Qi version of the tablet and received a very similar response when asking about the blotchiness – this was “a property of Pixel Qi and thanks for your cooperation.” Mada notes that half of the screen on the Adam is “physically brighter with noticeable blotchiness in any which way the machine is used in,” and that they doubt it’s a property of Pixel Qi.

Rambler at this point plans to return the tablet to Notion Ink under their 30 day product guarantee, even though he must pay for shipping, this out of sheer frustration. The corresponding words from the same PDF posted above:

Currently Rambler is waiting for a response from Notion Ink.

What do you think? Time to think more about that BlackBerry tablet? How about the XOOM? Maybe a nice Samsung Galaxy Tab 2 would be better?