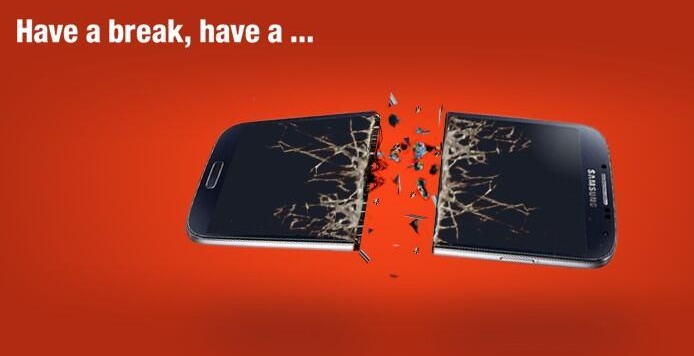 As we all know, the folks over at Microsoft and Nokia aren’t doing so great in the mobile space. Although, Microsoft looks to change that with their recent acquisition and buyout of Nokia. They’ll soon be taking the same approach as Apple and now Google, by having their own hardware company. In light of Sundar Pichai announcing Android 4.4 KitKat, Nokia’s now begging us all to “have a break” from Android.

I don’t know about you guys, but when I saw this the first thing I thought was “gimme a break” no one is switching to Nokia. Certainly not any of you Android fans that care enough to pay close attention to all the little fun Google has with naming. It’s a nice attempt by Nokia, and they’re going right after Samsung with their little image.

There is one possibility though. We’ll take a break from Samsung (as the image implies) and have some fun with HTC and their new One smartphone. And the folks from HTC agree with that notion. This probably wasn’t what Nokia was hoping when they released that image, but did they really think we’d leave Android for Windows Phone? Nope!

The jokes about Android 4.4 KitKat are only going to continue, but I personally love the idea. Might as well have some fun with the sweet naming of Android, and this is a great way to do so. After K we have L,M,N,O and we’re already hearing jokes of Little Debbies, Marie Calendar, Nabisco, and even Oreo. Right!? Awesome.

In the end though, the Nokia tweet was playing defense but probably all in good fun. If they really think we’re going to switch from Android to Nokia over a name, I suggest they “have a break, and have a…” Snickers, because they get crazy when they’re hungry.