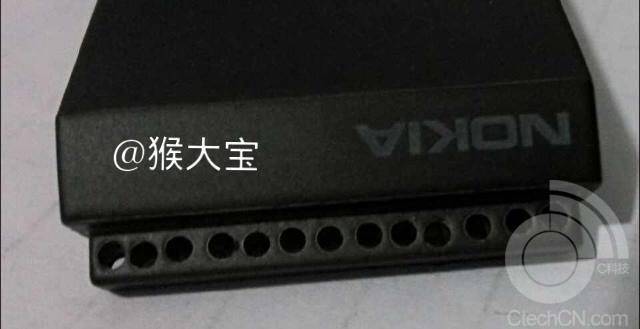 Interesting news out of China today, as a strange Nokia device has been photographed for our speculating pleasure. CtechCN is reporting that “microblogging users” @monkeybigtreasure (priceless) shared pics of the Nokia device, claiming it is a smartwatch. It’s interesting, but we have our doubts.

With the world currently flush with smartwatches, it’s no surprise that Nokia would have been working on something like this. While the pics are only of the sides, the device does seem to be a type of Nokia wearable. The device is curved, as though it would fit around your wrist. It also has machined holes for what could be a strap (they’re crudely drilled, but let’s remember this is a prototype).

So, let’s speculate a touch. First, it does look very much like a smartwatch — curved, apparently on the small side, and branded prominently with the Nokia name. It makes sense that Nokia would work on something like this, as we now know they experimented with Android phones before selling to Microsoft a few weeks back.

Therein lies the problem, though: was this a WP device, and Android device, or something else entirely? Nokia sunk their entire lineup into WP, but was experimenting with Android. We hear persistent rumors of an Android/Google smartwatch, and some even point to it being released alongside the Nexus 5 this fall.

Microsoft now owns Nokia’s hardware division, and this device would fall under that category. We can hope, as many of us did when Nokia was its own entity, to see a branded Android device from them, but that’s not going to happen at this juncture. Not only is Nokia unable to build their own hardware, we find it hard to believe that Microsoft would allow something they own to be for a competing platform.

The space is flooded with independent smartwatches, and the Galaxy Gear is the first from a major OEM. What they all have in common is their failure to impress the masses. Pebble has sold well, but is little more than a notification center. The same can be said for the flashy Gear, and it’s saddled with being proprietary to Samsung. This could be a precursor to an Android device, or it could just be a shelved concept from a now defunct manufacturer.