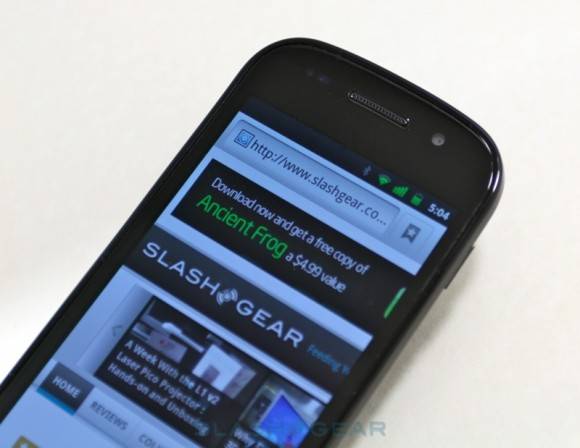 With the upcoming launch of Google’s and Samsung’s Nexus S device, it harbors the official launch of Android 2.3, or Gingerbread, along with the first device to fully suport Near Field Communication, or NFC. It may have not had as large of an announcement as the original Nexus device, but it certainly doesn’t lack the features we’d expect from a device like this. We’ve already unboxed the handset, and featured a quick hands-on, but now it’s time for the official review from SlashGear.

Just as we’ve come to expect from any review from SlashGear, the team focuses on all of the hot topics of the device. The hardware, considering the Nexus S features a slightly curved display, and the camera on the back. The Nexus S manages to take good pictures, and the video capturing of the device is top-notch. But of course, while the hardware is great (including the 4-inch Super AMOLED display, along with the 1GHz Hummingbird processor under the hood), the main focus of the device are the software-based features.

The upgrade to the Android platform, from Android 2.2 to 2.3, is one of the main takeaways of the device. It features a pretty unique, and expansive update to the User Interface. There’s a new keyboard. And, perhaps best of all, there’s a better implementation of selecting text on the device, for those without a trackball. And, of course, the usage of NFC. The device is the first to feature the technology, and Google is banking on it becoming mainstream, but even without it, the Nexus S stands out.

Check out the gallery below, along with the pair of Nexus S hands-on videos. And then head through the source link to find out of the Nexus S should be your next Android device.