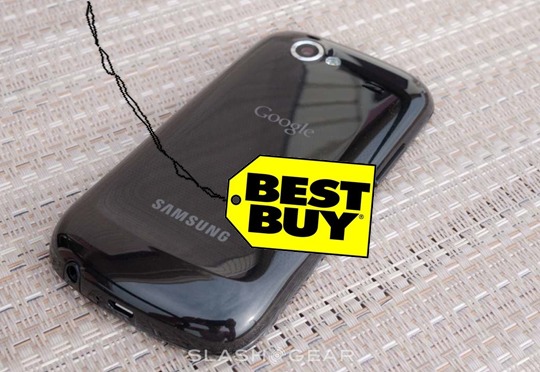 As the Nexus S is quite soon going to be available at Best Buy, and more than just a couple people are interested in it, the store decided to field a few questions about the device. Some of the details you might already know, but a few are oddities and result in facts the rest of the world’s been unaware of up till now. Prices, financing, contracts, display models, accessories, and more!

Some of the facts that result of this Q and A are thus: the release date of Nexus S is indeed Thursday, December 16, 2010. It can be purchased at large Best Buy stores, Best Buy Mobile stand-along stores (in malls, etc,) through Bestbuy.com, and over the phone at 855-813-2021. NOTE though that there is no overseas shipping at this time. The phone will be available as an unlocked phone with no contract and no activation or locked with a 2-year T-Mobile contract. There are no pre-orders, and will be sold on a first-come, first-serve basis via a ticketing system similar to what Best Buy used on Black Friday.

Although some stores might still be in the process of getting prepared for the launch (aka you’ll call them up and they’ll have no idea what they’re doing,) Nexus S will indeed be available at ALL Best Buy locations. There IS a limit to the amount of phones a single person can buy: 2, and that goes for activated units and units purchased outright. At the moment, Best Buy cannot comment on their inventory numbers, so good luck.

Check out the rest of the questions in the official Q&A list from Best Buy below:

The Google Nexus S smartphone, manufactured by Samsung, is one of the hottest mobile devices of the holiday season. Questions have been pouring in ever since the Nexus S was officially announced, so we’ve collected and categorized some of the most frequent customer concerns for easy reference.

Where can I buy the Nexus S?
The Google Nexus S can be purchased at Best Buy stores, Best Buy Mobile stand-alone stores, Bestbuy.com and through our dedicated call center (866-813-2021).

What carrier(s) are available for the Google Nexus S?
The Nexus S is available with T-Mobile service or as an unlocked phone with no contract and no activation.

What features and specs does the Nexus S come with?
Visit Google’s Nexus S page for a full list of specs and features.

Are there two different versions of the Nexus S, locked and unlocked?
No, there is only one Nexus S. It is available locked with a 2-year T-Mobile contract or unlocked with no contract.

BUYING THE NEXUS S
Will Best Buy be taking pre-orders for the Nexus S?
There will be no pre-orders on the Nexus S. Units will be distributed on a first-come-first-served basis on launch day. We will use a ticketing system much like we do on Black Friday to allocate inventory and keep the process organized.

Will my local Best Buy be carrying the Nexus S? I talked to the staff there and they didn’t know.
Sorry for the confusion. We are still in the process of getting all of our stores prepared for launch. The Nexus S will be available on launch date in both locked and unlocked versions at all Best Buy stores, Best Buy Mobile stand-alone locations and online.

Will Best Buy Mobile stores that don’t usually sell T-Mobile carry the Nexus S, since it’s an unlocked device?
Yes. There will be inventory in all stores, as well as available for purchase online as a T-Mobile device and shipped to home.

Will your stores have displays for the Nexus S so I can get a feel for the size, screen and other features?
Yes. Every Best Buy and Best Buy Mobile location will have either a mock or live unit for display purposes.

Will there be a limit on numbers of phones per order/customer?
Two per customer is the limit. Same rules apply to activated units and units purchased outright.

If I recently purchased another phone at Best Buy and want to exchange it for the Google Nexus S, can I?
Yes, but only within our standard return and exchange period of 30 days. We regret that we cannot make exceptions to this policy, even if the Nexus S is not available within the 30 day limit.

PLANS, CONTRACTS AND NETWORKS
Do the same prices apply to new purchases and upgraded contracts?
Yes. The Nexus S can be purchased for $199.99 with a 2-year new or upgrade activation or $529.99 as an unlocked phone with no contract and no activation.

If I purchase a full-price $529 Nexus S, will I be locked in to a 2-year contract?
No. Outright device purchases won’t require a contract.

Will an unlocked Nexus S work with carriers other than T-Mobile?
Yes, but it won’t run on 3G with all carriers. Speed and power will be reduced on non-3G networks.

If I’m unable to upgrade and renew my account, can I still add a new line to my plan and get the Nexus S?
Yes, however, you will need to change your account over to a family plan if you are currently on an individual line. Note: pricing for various activation types is not confirmed yet.

Can current T-Mobile customers purchase the Nexus S locked for T-Mobile for the $199 price?
Yes, with a qualifying upgrade activation. Customers must be upgrade eligible in order to qualify.

Would I be able to upgrade to the Nexus S even if I have a family plan on T-Mobile?
Yes. This would be considered an upgrade activation.

How much will it cost to add a line with my Nexus S purchase?
Adding a line will cost $249.

Does the Nexus S support T-Mobile’s 4g network?
No. The Nexus S is a 3G device and does not support HSPA+ data.

If I buy a phone with a contract, am I required to get voice and data plans?
Yes. Voice and data are required.

SHIPPING AND SUPPORT
Can I purchase the Nexus S online and pick it up at a local store?
In-store pick-up for online Nexus S orders will not be available, at least for the first week of sales. Home delivery will be available.

Is the Nexus S available for overseas shipping?
No, not at this time.

Can I order the Nexus S from a non-U.S. location and have it shipped to an address in the United States?
Yes, but keep in mind that all Best Buy purchases are intended for use in the U.S. only. Here is some information on our international ordering policy.

Will T-Mobile handset insurance still apply for this handset?
T-Mobile will not be selling the phone so they will not be offering their insurance. We recommend Best Buy’s Geek Squad Black Tie Protection ($9.99 per month).