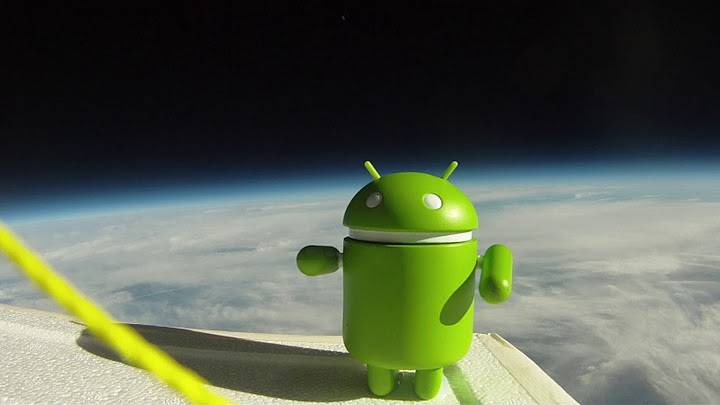 You might be aware that a few days ago some students from the University of California teamed up with Google Engineers to send a Nexus S into space. What you might not know is there’s super cute video to go with – and what went into space with the handset? At least one cute little vinyl plastic Android toy – Hooray! Check out the full video of this fun team jamming payloads 100,000 ft above the earth, handsets running Google Maps for Mobile 5.0, Google Sky Map, Latitude, and the teams own custom sensor logging app.

Google Engineers worked with UCSC student Greg Klein of a crew of students to prep each foam cooler encased payload. On each rig is a nylon load line attached to the cooler and to a radar reflector, a parachute, and a weather balloon. Each rig also has an APRS transmitter attached to a GPS and batteries for power. After that, each rig was different. Some had digital cameras for taking pics and some had video cameras mounted at different angles (up, down, and at the horizon.)

The apps running on each Nexus S going up with these balloons did the following:
Google Maps for Mobile 5.0 with offline data to see what was directly below the balloon.
Google Sky Map to see if they could identify the real stars in the backdrop.
Latitude to report location when the phones had a data connection.
A custom sensor logging app that sampled all available sensors on the device.

And then there were the super cute toys! If you don’t know which toys these are, take a look at this post which’ll give you a full rundown. You can take a full peek at a video of how each of the packages were prepared here:

What did they find? LOTS! Each of the boxes collected a pack of data, several of them reached pretty freaking high altitudes. The highest altitude one of these packages reached was 107,375 ft., over 20 miles high, “or over three times the height of an average commercial jet.” The fastest one of these packs went was 139 mph. Additional data is thus (straight from the Google mouth):

In tracking the sensors on each of the phones, we observed that the GPS in Nexus S could function up to altitudes of about 60,000 ft. and would actually start working again on the balloon’s descent. We also saw that Nexus S could withstand some pretty harsh temperatures (as low as -50˚C). Some interesting data we collected:
Maximum Speed: 139 mph
Maximum Altitude: 107,375 ft (over 20 miles, over 30 km)
Maximum Ascent Rate: 5.44 m/s
Average Flight Duration: 2 hours, 40 minutes
Average Descent Time: 34 minutes

After analyzing the data they collected, the group found the speed and altitude of the jet stream: approximately 130mph and 35,000 ft! After each of the packages reached their top height, they of course came crashing down – but every single package was recovered (including one they sent up last week as a test.) Good job!