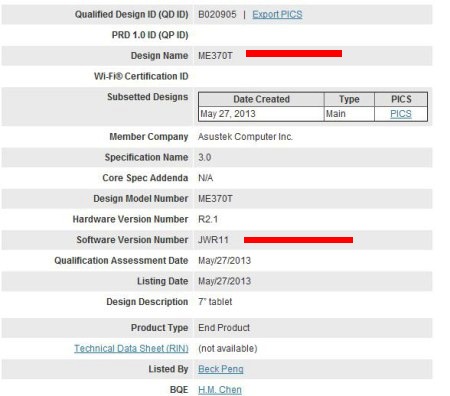 Today we’re seeing what could possibly be the next-gen Google Nexus 7, or at least another version of the current model. We’ve been seeing and hearing a lot about Android 4.3 Jelly Bean lately, and today it’s appeared again looking all official at the Bluetooth SIG. All devices clear Bluetooth certification, similar to the FCC, and today there’s an interesting Nexus 7 making the rounds.

The Bluetooth Special Interest Group (SIG) website has just pushed out some details and documents showing a Nexus 7 with a new version of Android clearing through their process, and it’s even dated May 27th. So this is extremely fresh. Interestingly enough the version of Jelly Bean on board is new, being 4.3 (not 4.2), but older than some recent leaks we’ve also seen lately.

Shown as build JWR11 as the software version number which means it’s certainly not Android 4.2 and is indeed Google’s latest update. However the Nexus 4 we saw last week had a much newer build being listed as JWR45B. So most likely this is an early testing unit simply clearing certification processes.

Oddly the device model number is listed as the ASUS ME370T, which is the same as the Nexus 7. Why it would need to clear again doesn’t make sense, although we’re expecting tons of new changes to the Bluetooth stack in Android 4.3 Jelly Bean, so that could be why it needs to be re-certified. Many leaks have suggested a new Nexus 7 is coming soon with loads of improvements and new hardware, but in the meantime we’ll gladly take an update to Android 4.3 Jelly Bean on our current units.

A new Nexus 7 and or Android 4.3 is coming soon, it’s just a matter of when. Previous rumors are still suggesting June 10th for the announcement so stay tuned.