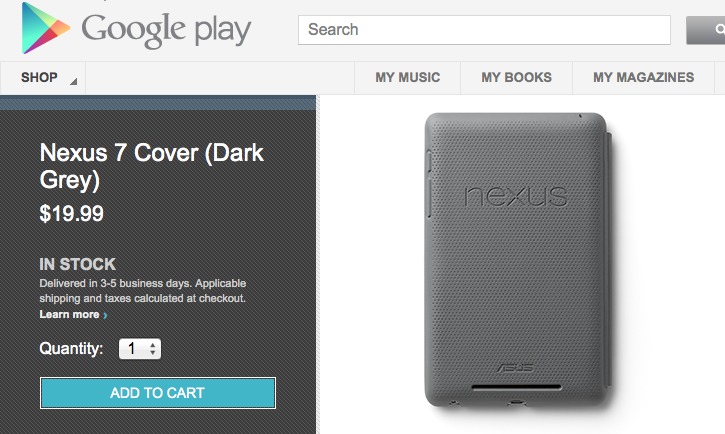 Who wants a case for that shiny new Nexus 7? When Google announced their much anticipated Nexus 7 tablet at Google IO it immediately went up for pre-order on their Play Store. Along with it was an official case that sold out in a matter of minute and has since been listed as “coming soon.” If you want a real case for the Nexus 7 (not a homemade one from the Kindle) they are available now.

The Google Play Store has just added the official ASUS/Google Nexus 7 dark grey case to “In Stock” and shipping in 3-5 days. Most likely we’ll be seeing this case sell out, possibly by the end of the day. So you should probably act now if you want one. Hopefully the colorful ones ASUS teased are coming soon.

The cases appear to have no sort of magnet for auto on/off like we discovered a few weeks back, so that is a bummer but an easy fix. The case comes with the same neat finish on the rear, has a matte coating and is dark grey. It offers full port access to micro-USB charging and syncing, as well as the headphone jack so that shouldn’t be a problem. They are available right this minute for just $19.99 but probably won’t last long. Hit the link below and buy your own today.