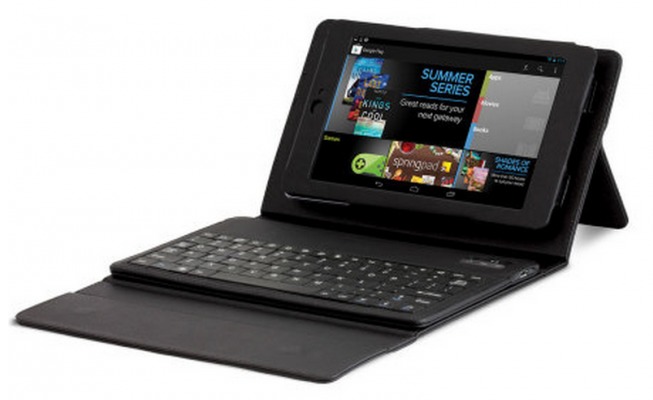 The new Nexus 7 tablet might not be a Transformer Prime but that doesn’t mean it won’t be getting its own keyboard. If some new reports coming from Mobilefun are accurate we’ll be getting a bluetooth keyboard dock, smart cases, screen protectors and more all officially licensed for the Nexus 7.

Yesterday we reported on some leaked pictures showing a desk dock with audio out options, as well as a few genuine leather cases, but today we have 5 accessories all for the new tablet instead. They are listed as officially licensed ASUS products, and will be for sale soon.

According to MobileFun we can expect a case with a Bluetooth keyboard (might be small and hard to type on) that will offer extended up-time with its own built-in battery. There is also a case that doubles as a completely rotatable stand. That means it opens up and you can rotate the tablet from portrait to landscape for gaming, reading, or watching YouTube.

Then they’ll have screen protectors as usual, but you can get those from a 3rd party almost anywhere these days. If the reports are accurate all 5 of these accessories designed for the Nexus 7 will be available shortly for sale. All the cases are “smart” cases and use the magnetic sensor to auto wake/sleep the tablet too. Personally I won’t use a case that makes my tablet too large or clunky. Do you guys plan to buy any of these?