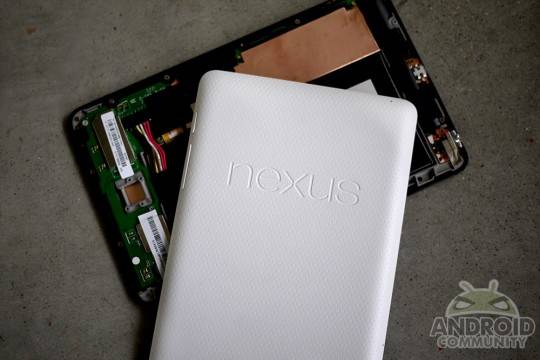 A new teardown report of ASUS and Google’s new Nexus 7 tablet has been released that conflicts with previous reports. After announcing the tablet Google was quoted saying they were making no profit from the tablet, but that wasn’t entirely accurate. Last week we reported the tablet cost around $184 to manufacture but new reports today claim it’s much less.

According to AllThingsD, who spoke with teardown specialists iSuppli the Nexus 7 costs a little under $152 for Google and ASUS to manufacture and produce. That is for their 8GB model priced at $199. This means after the $25 free gift card to the Play Store, shipping, advertising and logistics they probably were being honest in saying they’ll pull zero profit from the slate.

The 16GB model however is their bread and “butter” where it will be purely profit. Costing $249 for buyers yet only costs Google an additional $7 to add in another 8GB memory module, making the other $50+ pure profit for the folks at Google and ASUS. iSuppli even mentions the Nexus 7 costs only $18 more than the Kindle Fire to produce. What does that $18 get you? A camera, Tegra 3 quad-core processor, and a better display — all things I’m sure the Kindle could have managed.

For many these teardown and cost estimations don’t matter, but it’s interesting to see the full breakdown and cost analysis. Did you buy the Nexus 7 and if so did you get the 8GB or 16GB?