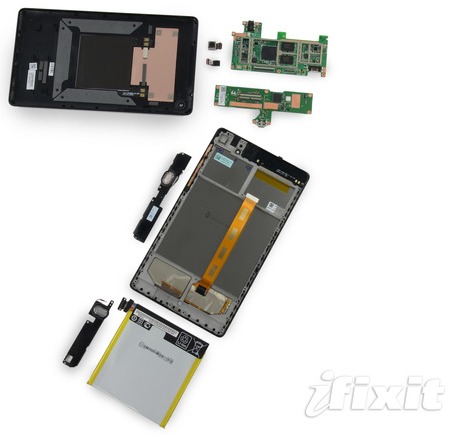 The folks over at iFixit have been in a bit of a teardown frenzy, first giving the Chromecast a quick dissection, then heading straight to the newly unveiled Nexus 7 2013 tablet. Despite some glue that makes removing the battery a bit tricky, the tablet is easy to disassemble, and was awarded with a score of 7 out of 10.

iFixit says the new Nexus 7 has “drastic” body type changes over the original slate, with it being narrower, longer, and thinner, as well as lacking the textured backing of the first generation. There’s also the addition of a rear camera, as well as three grilles for the stereo speaker setup.

The rear case can be removed using only a standard plastic prying tool, but iFixit warns users that the plastic is thin, and that – despite working gently – they managed to crack their case a bit while removing it. Beyond that, the process is pretty straight forward, with the first component that’s visible being the battery.

There are a couple of seals that will be broken by removing the battery, so those who wish to preserve their warranty will need to tread carefully. Likewise, the battery is held in place with some adhesive, which iFixit says makes it difficult to remove. Once out of the way, however, the motherboard and daughterboard can be removed.

Some of the hardware revealed by the teardown includes NAND Flash from SK Hynix, a Texas Instrument BQ51013B inductive charging controller, and Elpida J4216EFBG SDRAM. Overall, iFixit says that opening and repairing the tablet is simple, with the pros being an easy-to-open rear case and the use of only Philips screws. The one negative was the front glass, which can only be removed using a heat gun.