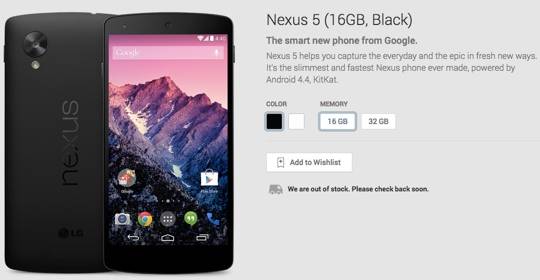 Google quietly unveiled the Nexus 5 a short while ago and it looks like the inventory is being snatched up quickly. A quick check of the Play Store listing for the Nexus 5 now has the 16GB models showing as being out of stock. The 32GB model remains in stock, but given a slip in the shipping date — we aren’t sure how much longer that will last.

Basically, the Play Store has the “out of stock, please check back soon message” showing for the 16GB model in both black and white. The initial orders were coming in with a 1-2 day timeframe and those quickly jumped to a November 8 ship date. A few order confirmations we have seen are showing a ship date of November 5th and those were for orders that were placed shortly after the initial availability.

As a recap, the Nexus 5 is priced at $349 (16GB) and $399 (32GB). The handset will be running Android 4.4 Kit Kat and arriving with specs to include a 4.95-inch Full HD display, Snapdragon 800 processor, 2GB of RAM, 2300 mAh battery and 8 megapixel rear-facing camera with optical image stabilization. Other specs include a 1.3 megapixel front-facing camera, dual-band WiFi, Bluetooth 4.0 LE, NFC and Corning Gorilla Glass 3 to help protect the display.

Also, as we recently learned, Nexus 5 users will be amongst the first using Hangouts v2. Other devices will see Hangouts rolling out from the Play Store in the coming weeks. Hardware and software aside, there is no word on when the 16GB inventory will come back to an available status. Not to mention, no word as to if, or when the 32GB inventory will finally slip from November 8 to out of stock.