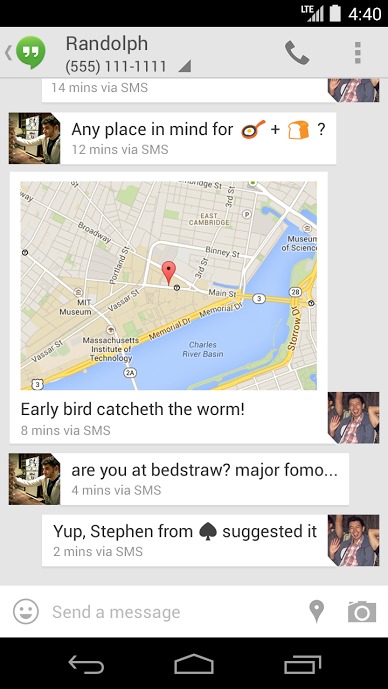 Google announced some updates to Hangouts at the Morning with Google+ event earlier in the week. At the time we learned what we can expect with the update, though there wasn’t much in terms of when we could expect it to arrive. And well, Google still has yet to offer a specific date, but there has been some additional details released.

The Nexus 5, which is running Android 4.4 Kit Kat will be launching with Hangouts v2. From that point, Google will be rolling the update out via the Play Store over the “next few weeks.” Basically, those grabbing a Nexus 5 will not only be first with Kit Kat, but also first with the new Hangouts.

Of course, as we learned earlier in the week, the new version of Hangouts means features such as SMS support, location sharing and animated GIFs. There will also be some additional sharing options. These options range from device, to in-call, to mood status. Basically, Hangouts users will be able to share what device they are using, if they are on a call and the current mode — these will all show in Hangouts right along with the “read up to here” indicator.

Otherwise, the location means you will be able to quickly share where you happen to be at the moment. In addition to the GIF support, you will also be able to share any of your auto-awesomed images. And lastly, the SMS support is what many had been waiting for. But the good news here is that is for both SMS and MMS.

Along with these features, Google has also made some other improvements. They have said it will be easier to start new conversations, you will be able to attach images from other sources (including Drive) and in general, they have “added some butter to make the app faster and smoother.”