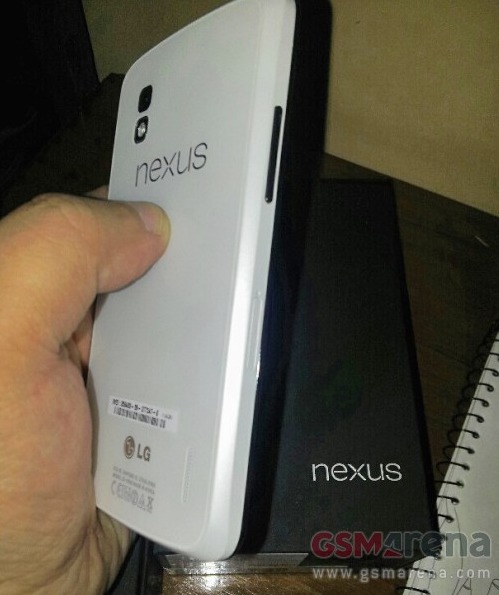 More and more details keep surfacing regarding a white LG Nexus 4 from Google and LG. Earlier this month some videos of the device leaked, followed by a sighting and bold June 10th release date rumors at Google I/O. Now we’re seeing two different leaks today of the smartphone, so it is pretty safe to say it’s coming soon.

Does a white Nexus 4 really matter at this point? I think what more people are waiting for is the Android version the rumored white model might come out of the box with. And that is Android 4.3 Jelly Bean. A white Nexus 4 was spotted at Google’s developer conference with Android 4.3 Jelly Bean, and according to the rumor it will be launched on June 10th with the latest version of Android.

Then this morning official press images leaked of the white model listed as E960W, the original Nexus 4 was E960, and that’s all we’ve seen until now. This afternoon GSMArena received a set of photos of the white flavor from a reader, who also stated it’s available and in stores in India. How could it be for sale without any announcement?

More importantly, the leakster also claimed the smartphone was sold with Android 4.3 Jelly Bean. Which means it could be a developer version that shouldn’t have been sold, and certainly wasn’t from a retail location. If it indeed does run Android 4.3 we’ll surely be learning more about it soon if it’s in the hands of a user in the wild. Google should hopefully be announcing something shortly so stay tuned.