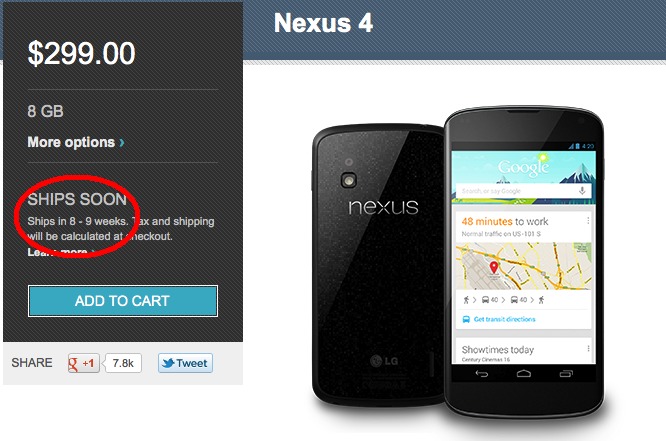 Yesterday the folks from Mountain View put their LG Nexus 4 smartphone up for sale on the Google Play Store for the second time in two weeks, and it sold out pretty much just as fast as the first round. Google’s new Nexus is either extremely popular and seeing an unaccounted for demand, or they need some serious work on their sales skills. The Play Store became almost unusable as Google warned users they still had stock, and to keep trying as it was experiencing a heavy load. Now lets talk shipping.

In case you can’t see the sad and depressing image above, last night Google updated their shipping estimates for the Nexus 4 — and brace yourself — 8 to 9 weeks for the 8GB Nexus 4. Seriously? Two months or more? So much for Christmas gifts, New Years, and any December birthdays. You can toss all of those ideas out the window. By then we’ll probably have Android 4.3 Key Lime Pie on the Horizon.

Jokes aside that is pretty terrible. Google and LG apparently are having some serious trouble keeping up with the demand. That or this is a ploy to get tons of attention — and it’s working. Google’s 8GB Nexus 4 is a great deal at $299, but sadly it isn’t set to ship for 8-9 weeks. The 16GB model is priced slightly higher and those estimates are sitting around 4-5 weeks. This means those probably won’t arrive until after Christmas too. 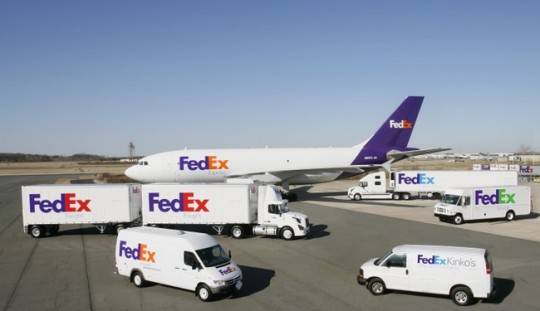 First time around they switched it to full on “Sold out” but now it appears they are leaving the device in stock, and instead just posting some painful and increasingly longer ship times. The picture above basically sums up what Google needs to do, and that is “round up the troops and get er done.” Sadly this is most likely an inventory problem more than anything. Yesterday evening these ship times were 1-2 weeks and 5-6 weeks. It seems like now the dust has settled Google’s realized just how many they need to ship.

Hopefully these are just “estimates” and Google gets some stock in and begins shipping these devices in the next 2-3 weeks. If users end up waiting 8 weeks we have a feeling there will be a few angry customers soon. We’ll be sure to monitor this disaster of a device launch, and update if the ship times get better or worse. Who purchased a Nexus 4 yesterday? If you did will you be canceling if you have to wait this long? Let us know below in the comments!