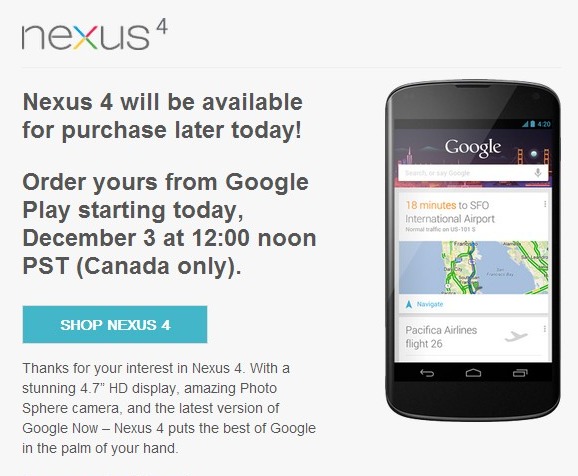 Google has just started informing those Canadian buyers that their extremely popular and hard to buy LG Nexus 4 smartphone is available now. We know how difficult it has been for many to get their hands on Google’s newest Nexus smartphone, and most likely those in Canada will probably face the same issues. The device is on sale right now so you’d better hurry.

Google sent out emails letting users know that as of today, December 3rd, at 12 PST the Nexus 4 will be available again in the Play Store for those in Canada. Just like in the US we expect the smartphone to sell out in a matter of minutes, not to mention you might get hit with the same slowdown and issues adding the illusive smartphone to your cart.

Google’s new flagship Android 4.2.1 Jelly Bean quad-core powered Nexus 4 is available right now, as of just a few minutes ago. This beautiful smartphone is rather fragile so make sure to buy that bumper case too if Google has any of those in stock. The Nexus 4 8GB and 16GB sold out in a matter of minutes each time it has been listed, so you better hurry and buy it right this minute.

For Canadians the Nexus 4 is priced at $309 for the 8GB model and $359 for the 16GB version and we’d suggest you go for the latter of the two. The ship times have been slipping and slipping here in the US, and the 16GB model will probably last a bit longer. Hopefully the Play Store handles the demand better this time around, as we all know how that worked out last week. Good luck guys!