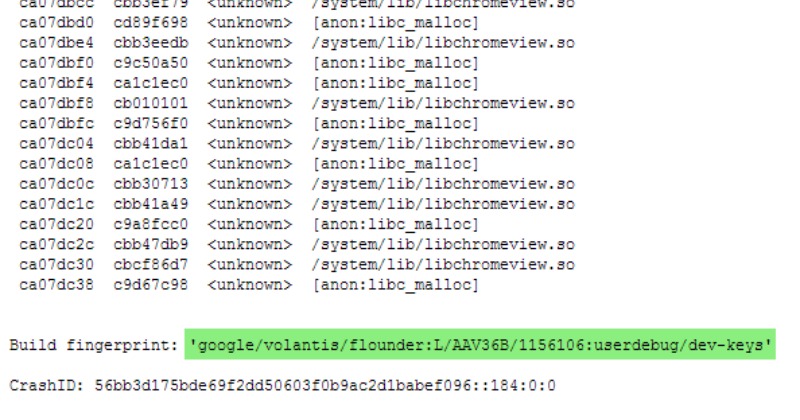 Google I/O is getting nearer and with it come hopes of maybe a new Google-blessed Android device. Naturally, we will be in for some rumors, the latest of which claim that the upcoming Nexus smartphone or tablet will be codenamed “flounder”.

It’s actually been quite a while since we’ve heard of a Nexus rumor, with the last one about an 8.9-inch tablet, developed this time by HTC. Of course, we’ve also heard about the so called “Silver” program that has split Android supporters into camps for and against the idea. This latest bit isn’t as polarizing, but it isn’t that informative either.

The “flounder” name came up from, of all places, a Chrome bug report. The issue is less significant, other than a crash report, but what is interesting is where the crash happens.

is the crucial part. According to those who tried to decipher the rather arcane piece of data, this refers to a development version of Android SDK Tools (“AA”) from the second quarter of the year (“V”), on the 36th day of that quarter (“36”, translated to May 6), and is the second build for the day (“B”). But perhaps more telling is the use of the name “flounder”, which can be a reference to the fish. Google has a penchant for fish codenames for its Nexus devices as can be seen in the listing here. The Nexus 5 is “hammerhead”, the Nexus 10 is “manta”, and the Nexus 7 is “grouper” for the WiFi version and “tilapia” for mobile, just to name a few.

Of course, this is still on the level of speculation, though the fishy name seems to lend a bit of credibility to the theory. It is still unknown what kind of Nexus device this will be but since the tablet line seems long due a refresh, we can only hope it will be one of Google’s slightly bigger slabs.

[UPDATE] This just in! XDA has shared some more details regarding this rumored Nexus device. The changelog for Android 4.4.3 MR2 reveals that “flounder” will indeed be made by HTC, as it is filed under “device/htc/flounder”. However, a new contender has also surfaced in that list. Something called “device/google/molly”, which is yet another fish, has also been spotted, adding even more mystery to the next Nexus. 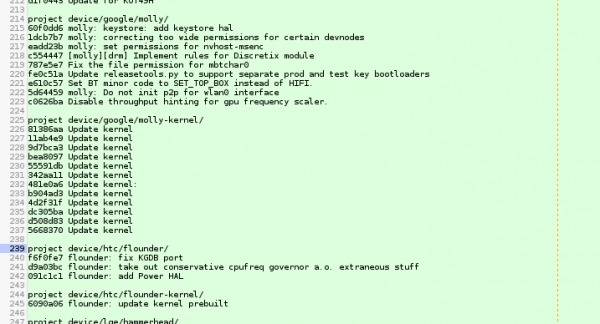