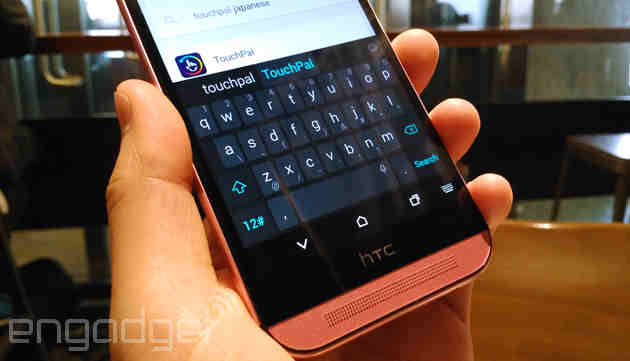 Starting with its brand new flagship, the HTC M9 series, all of the OEM’s new devices will now have TouchPal as their default input engine. This means that they have technically replaced Swype, which has been their default keyboard for the past years, although no official communication has been made regarding this change. HTC did announce that the brand new M9 smartphone is now using TouchPal, but did not comment as to why they’ve made the change.

According to their official press release, one of the improvements of their Sense 7 UI is the incorporation of contextual prediction technology, which is being powered by the TouchPal keyboard. But if you look at Swype’s features and track record, they also have a pretty good word prediction track record, although TouchPal has a simple advantage in that it has a “Wave” feature to input these word predictions. In terms of other features, TouchPal has the edge in the sense that it supports emoji input, predictions, art, and text emoticons, and it also supports more layouts.

However, one major difference between the two is that some TouchPal features like backup, sync, and cloud predictions can only be used with a paid subscription. We still don’t know at this point if these subscription payments will be waved if it is pre-loaded on the HTC devices. TouchPal COO and Chief Architect Karl Zhang said that he believes HTC chose them over their rival because their better contextual prediction as well as more language support, with over 90 currently on their plate.

While both of these virtual keyboards are available in the Google Play Store and can be downloaded on to any Android device to replace your native keyboard, the pre-loaded ones have a distinct advantage in terms of popularity. In fact, this is one of the reasons why Swype started to become known. How this change in HTC’s default keyboard will affect them, only time can tell. The bit of good news for them is that Acer recently announced that they are the official virtual keyboard for their newer devices.