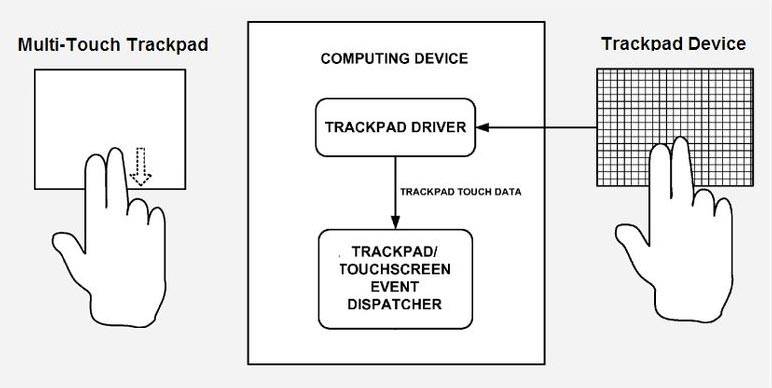 Tired of hearing about Android on the desktop? Too bad. Just days after rumors started spreading about a dockable desktop mode in Android 5.0 “Jelly Bean” Patently Apple (which really needs a new name, by the way, since Apple’s “spirit of invention” has devolved into copying then suing absolutely everyone) found patent filings pointing towards trackpad gestures in future versions of Android. You can take this one of two ways: that Google intends the smartphone/tablet to work as a trackpad in docked mode (as it can now) or that these features are aimed at full laptops or desktops running Android.

The latter isn’t totally out of the question either, since more and more traditional PC form factor devices are running on ARM-based hardware, and x86 versions of Android are already in development. At this point either seems likely, since we know virtually nothing about the next version of Android with any certainty. We’ll probably be getting a glimpse soon enough though: the Google IO conference (where major additions to the software platform are shown off) is coming this summer.

Google isn’t the only one dreaming of desktops. Canonical, the publisher of the Ubuntu Linux distro, pulled the covers off of Ubuntu for Android earlier this week. This combination of the ARM version of Ubuntu and Android Gingerbread runs as a standard smartphone at most times, then switches to a full desktop version of Ubuntu when docked via HDMI, retaining access to the phone and its apps. The execution is similar to, but much more expandable than, Motorola’s WebTop. Unfortunately Ubuntu for Android is being aimed at OEM s instead of consumers and probably won’t be coming out until the second half of 2012.

All this leaves one question: where is Chrome? Google’s other OS hasn’t seen much action since the original round of Chromebook hardware, and with Chrome for Android, it seems like the stand-alone operating system is being left behind in the dust. Hopefully we’ll hear more from Google at Mobile World Congress, but we’ll definitely be seeing something at Google IO.