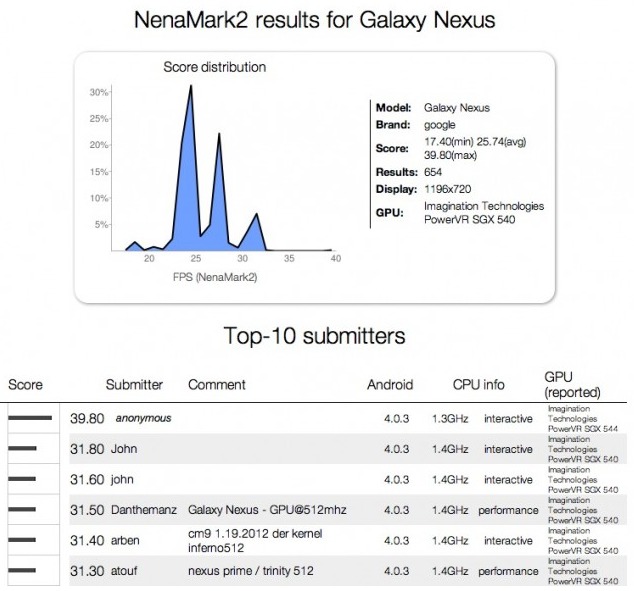 For now we are going to chalk this up as just a rumor or most likely some spoofed information. What we are seeing is apparently some benchmarks ran of the popular NenaMark2 suite. What makes this unique is the device is being listed as the Samsung Galaxy Nexus — only with a new TI OMAP 4470 processor with much, much better graphics and a possible speed of around 1.8 GHz. Interesting indeed. Is Samsung about to pull a Motorola and drop another device so soon?

Now obviously this information can be faked but we’ve seen plenty of benchmark results from NenaMark in the past that have wound up accurate but we’ll still take this with a large grain of salt. Lets break it down though. The current Galaxy Nexus runs at 1.2 GHz on a TI OMAP 4460 with the SGX540 graphics processor. The leak above seems to be running at 1.3 GHz but offers the SGX544 GPU. Something that we know to be coming on the new 1.8 GHz capable TI OMAP 4470 processor.

Back in June TI announced the 1.8 GHz 4470 CPU and stated we would be seeing it hit devices come early 2012, so this could make sense but I’m sure many Galaxy Nexus owners would be extremely upset if their shiny new phones get replaced by something better so quickly. Obviously this could also just be an overclocked Nexus with some information changed in the GPU department so we’ll just have to wait and see. Interesting stuff. Maybe Motorola is rubbing off on Google — which is rubbing off on Samsung and we’ll get a Galaxy Nexus Plus or something.