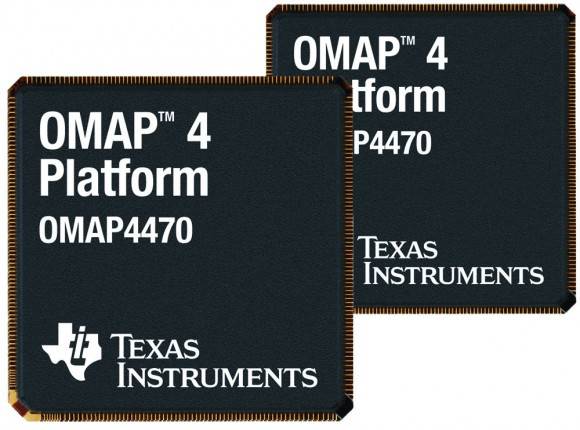 Texas Instruments silicon has been a bit scarce in top tier Android devices in 2011. In fact almost all of the uber-phones of 2011 so far are running on either Qualcomm Snapdragons or Nvidia’s Tegra 2. TI is looking to change that with the announcement of their latest OMAP ARM processor, the OMAP 4470. The dual core processor is said to launch in the first half of 2012.

While we can’t be sure why TI’s chips seem to have fallen out of the good graces of Android OEMs of late, this chip seems to be poised at offering some major incentives. While 2012 is a little late to peg this processor as the chip to land in the first Ice Cream Sandwich phone this winter, it could make a big splash when it does thanks to its top tier specs and a couple tricks as well.

The chip will be clocked at a blazing 1.8 GHz, almost twice as fast as the Tegra 2. But what about Nvidia’s Kal-el processor and its FOUR cores? Well if the new OMAP won’t be making it to devices until 2012, you can be sure it will be competing with with Nvidia’s quad-core device, said to be available at the end of this year. The OMAP4470 has a trick up it’s sleeve though. In addition to its two ARM A9 cores, it will have two smaller ARM M3 cores to ease the load on the two main cores during resource intensive tasks like rendering 3D graphics. TI claims that these smaller cores will draw less power, optimizing battery life, while still providing some extra “oomph” for the times when you’ll need 4 cores.

We still have some time until 2012 and Qualcomm and Nvidia certainly aren’t resting on their laurels while TI develops their latest chip. With mobile SoCs continuing to get faster and more energy efficient at an incredible rate, its only a matter of time before I’ll be able to make a certain Dragon Ball Z reference about my Quadrant score…