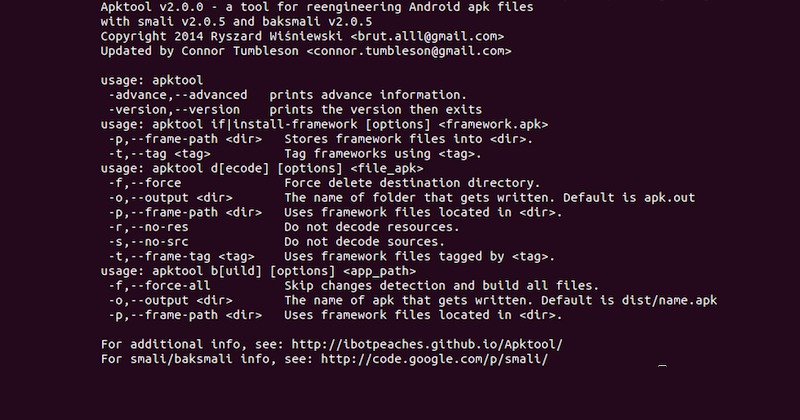 After almost two years, the latest Android APKTool, the Apktool v2.0.0, has just been released. The last update was rolled out last August 2013 with user friendly changes and some over haul under the hood. It hasn’t really been that long since beta versions have been released the past two years or so.

According to our source Connor Tumbleson, this v2.0.0 of the Apktool will adopt and will add support for Android 5.1 and BCP-47 tags. Several changes can be noted as well including fixes on issues like double escaping of & and <, unknown files not respecting compression method, decoding .spi files as 9 patch images, apktool branding apks with platformBuildName, multiple dex files skipped when using -s, and @string references in attributes.

Don’t be too overwhelmed with all the codes and the symbols you see though. If you’re a developer, you’d probably be delighted to learn this good news. Tumbleson has provided a comprehensive Instruction Guide for downloading the Apktool v2.0.0.

The fixed issues listed above were mentioned by other developers who already tested the v2.0.0. Apktool. Feel free to download this release and be prepared for migration especially if this is your first ever v2.x release. After downloading the file, make sure you rename to apktool.jar and follow the guide. Good luck!