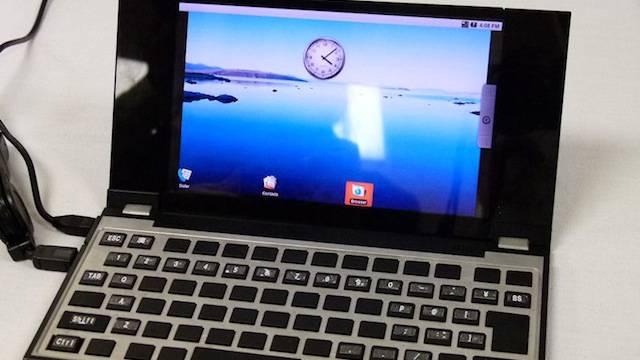 What do we have here? This isn’t the first netbook we’ve seen running Android, but it is one of the most Interesting. Japanese manufacturer NEC has revealed the MGX, an Android-powered device in the “pocket translator” form factor popular across Asia. The device is in the early stages of development – you can see it’s running Android 1.5 or 1.6 in the photo below.

Details are pretty scarce on the prototype, which is understandable considering that the hardware is far from finished. NEC did say that the MGX uses a 7-inch OLED display panel with a standard 1024 x 600 resolution. The screen can fold back on itself, making the device a convertible tablet of sorts. NEC is claiming a 10-hour battery life. The dimensions are 8.5 inches long by 3.5 inches wide, and at a glance it looks like less than half an inch thick when the lid is closed.

The prototype is bound for a 2013 release in Japan, and considering NEC’s lack of presence in the US, probably won’t be landing stateside at all. Some may wonder what the point of such a device is when tablets and full-sized netbooks already exist, but this particular form factor is very popular with students and businesspeople in certain markets. The MGX may be the first indication of a shift towards Android on this range of devices. But NEC, bump that sucker up to Ice Cream Sandwich at the very least before 2013, OK?