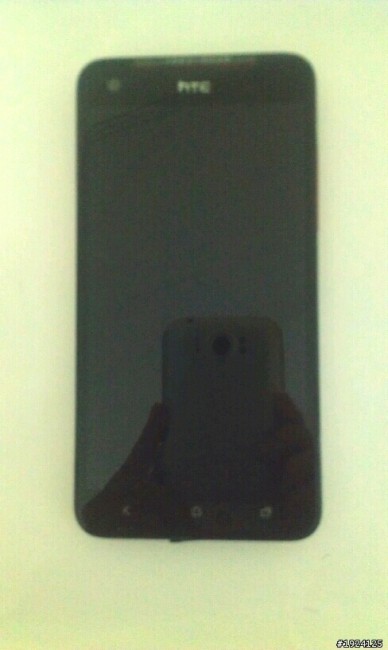 Earlier this week we got our first glance at the upcoming and still very mysterious rumored 5-inch Galaxy Note rival from the folks at HTC. Fast forward a few days and now we are getting our third picture of the unknown handset only this time we can see that 5-inch screen in all it’s blurry glory. The photo surely isn’t clear — but we’ll take what we can get.

Over the past few months we’ve been hearing subtle rumors that HTC is planning an impressive 5-inch 1080p smartphone phablet to take on the competition from Samsung with their Galaxy Note II, as well as LG’s Optimus Vu. After a few leaks suggested the phone could head to Verizon we got a little excited.

Monday’s leak showed a rather large device that is most likely the rumored 5-inch smartphone with plenty of red accents like we’ve seen with recent HTC devices on Verizon like the Incredible. While that was the initial thought multiple other sites are stating this could be the tight lipped HTC One X+ we’ve heard a few rumors about in the recent past.

Whether this is a quad-core Tegra 3 packing One X+ boosted to 1.7 GHz like rumors have suggested, or the 5-inch HTC phablet we’ve been waiting for either way we want to know all the details — and soon. The folks from TechOrz managed to snag this front facing photo and are calling this the Endeavor C2, which would make it be a successor to the HTC One X, and not a 5-inch device. Either way we’ll be finding out more details soon, possibly at HTC’s event slated for later this month.

What do you guys think? Or is it too blurry to tell?