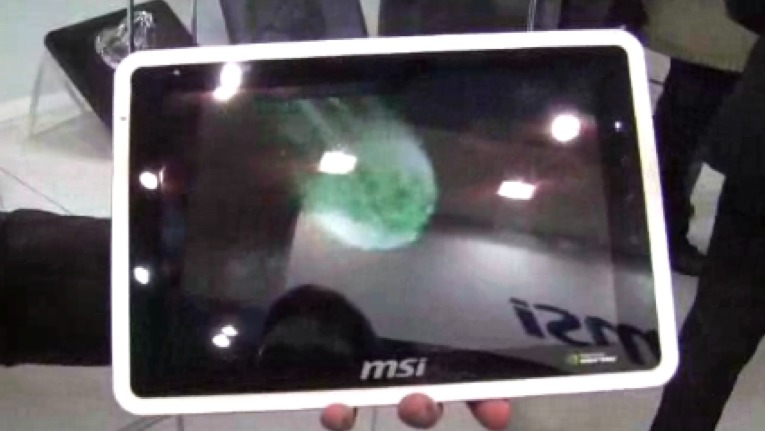 We’ve been passed a video apparently filmed during CeBIT in Germany by The Inquirer of a relatively new, not yet released, but not completely unannounced Android 3.0 Honeycomb tablet by the name of Windpad. The full name they’re going with thus far is MSI WindPad 100A, MSI of course standing for our good pals at Micro-star International, a Taiwanese electronics firm that was more than glad to show off the pad to an intrepid reporter. This tablet is approximately the same size as the Motorola XOOM at 10.1-inches in the display (capacitive), but has some excellent if not odd features that are quite enticing.

First you’ll notice the trackpad – but wait, where is it? It’s essentially invisible, sitting right up there in the upper right hand corner for you to use with your thumb so that you’ll not have to hold the tablet with one hand, a practice which the presenter says is unhealthy. At the moment we’re not entirely sure if what we’re seeing along the righthand side of the display is four physical buttons or if it’s just dips in the glass showing where four buttons are accessible by touch – and is the trackpad a nubbin, or a tiny flat pad? We’ll see soon enough.

Inside is what we hear will be a 1GB Tegra 2 dual-core processor, a completely custom user interface (that more than likely every developer from here to Japan will reduce back to Honeycomb basic,) which includes a dock showing home, web browser, books, gallery, movies, music, and apps – which we believe means we’ll be able to fill this dock with whatever we like. Either way though, again, more than likely this UI will either change before the release or be changed by hackers once its out. Additionally, we know this tablet will have storage of 32GB in an solid state drive. On the back of the tablet there’s a 5-megapixel camera while the front has a 2-megapixel camera.

Along the righthand side, (and remember we’re landscape here,) is a full-sized USB port (for a keyboard, says the presenter) as well as a power cord port. On the left side you’ll find a power button, miniUSB port, HDMI port, SD card reader, headphone jack, and a switch that locks the orientation of the screen. There will be two versions shipped, though we’re not sure where and on what carriers, one just Wifi and the other 3G. The unit weighs in at 800g which is 1.764 pounds which, as you may already know, is about .1 pounds heavier than the XOOM (which we have a full review of here.)

More enhancements are in place made to move you further and further away from having to use your fingers at all including a feature in their photo gallery allowing you to simply tip the tablet one direction or the other to move to and from neighboring photos. But they haven’t forgotten about fingers, of course, noting that they’ve got up to four finger touch when you want to use them all.

The tablet has a rather unique form factor in that the display is there with its averaged sized black bezel, but then there’s a sort of dip and bonus white plastic bezel around that for comfort in holding. Not only that, they mention that this extra border adds protection for the main panel if you decide to drop it – smart! This along with the tough aluminum back should keep this tablet in the game while you’re whipping it across your house when you realize how difficult Monster Madness can really be.

The battery lasts 8 hours (which is definitely not quite as good as the XOOM,) but the price is definitely set to compete, starting at 399 EURO, according to this report. This tablet is set to release near the middle of 2011, which puts it right in contention with the big fat giant wave of tablets coming out at that time – so we wish it good luck, unless it can come faster and actually be one of the first Honeycomb tablets.

That is the most important part, again, the fact that although you’re seeing this video of the device running Android 2.3 Froyo, but that it’ll be mass-produced with Android 3.0 Honeycomb – if it can make it inside the next couple months, it might have a really good chance of selling the heck off the shelves.

Check out another video from CharBax from way back at CES 2011 below — why has this received such a small amount of press? We just can’t figure it out – maybe it’s too cute.