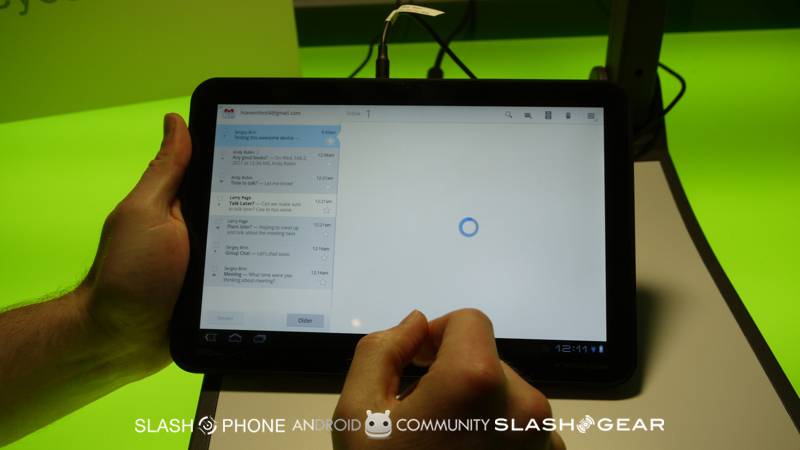 As you may already know, we got up close and personal with Android 3.0 Honeycomb today via a special event for this brand new mobile operating system. This mobile OS called Honeycomb is made by Google to be specially suited for working with tablet computers, the first and most closely worked with of these tablets being the Motorola XOOM. The tablet itself is approximately the same size as the Apple iPad, with a screen basically in the same range, the iPad being 9.7″ while the XOOM has a 10.1″ screen.

Resolution on the Motorola XOOM’s screen is 1280 x 800 (160dpi), its rear-facing camera recording at 720p and the video playback working at a generous 1080p. There’s a speaker and a front-facing camera in place so you can comfortably chat essentially face-to-face with whomever you know that has a compatible device. The camera placed at the back of the XOOM is 5 megapixels while the front is 2 megapixels.

As you can see in the images above and below, there’s a Motorola logo in the upper left, and a Verizon logo in the upper right, both of them on the black bezel which surrounds the screen. The front-facing camera is right in the center, above the screen, again inside the bezel. The touchscreen is very obviously amongst the most responsive we’ve ever experienced. The glass is also quite prone to picking up fingerprints.

Power cord plugs in to the side of the device opposite the side of the front-facing camera. On the back of the device is the back-facing camera, this camera sitting near the left side (or right side if you turn it to face you.) Along with the camera on the back, there’s a lock button and a flash, all of these along a nice looking oval which also houses one of two rear-facing speakers, the other approximately the same distance away from the edge, but on the other side of the back, also near the top.

In the center of the back is a barely visible, tastefully placed Motorola “M” logo. Of course all of this is punctuated by the fact that inside you’re going to find an engine by the name of 1GHz dual-core Tegra 2. Take a look in the gallery below for a closer look.