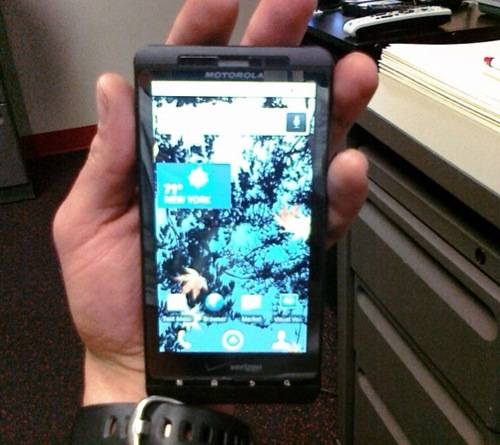 Having gone through a prolonged dry-patch, news on the Motorola Shadow now seems to be coming through with some frequency.  According to Gizmodo’s tipster, this prototype handset was “found” in a Verizon corporate gym in Washington, and was promptly remotely locked.

When the owner came to collect it, however, he apparently confirmed that the device has 16GB of memory, uses a Qualcomm Snapdragon processor, has a HDMI port, 8-megapixel camera and 4.3-inch screen.  It certainly looks like the so-called DROID 2 we saw in leaked Verizon documentation earlier this month, though at that point a 12-megapixel camera was tipped.

The Shadow is expected to launch in June or July, and while we don’t know if this leak is authentic or not we’re still excited.  This is basically Verizon and Motorola’s version of the HTC EVO 4G, only lacking WiMAX, and considering the limitations of the WiMAX network at the moment if the Shadow is priced sensibly they could find themselves with plenty of takers.