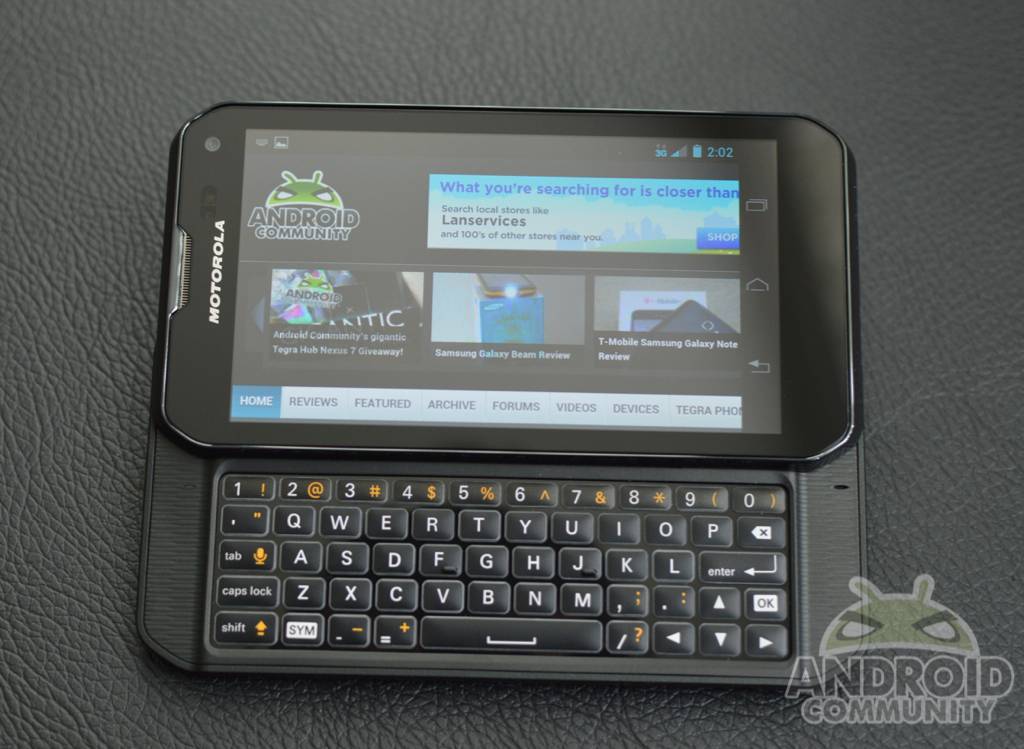 The newest slide-out hardware QWERTY keyboard rocking smartphone has finally hit the market. That being the brand new Motorola PHOTON Q 4G LTE with the Now Network. Motorola calls this a “triple threat phone” with a great screen, PC-like keyboard, and dual-core processor. Stay tuned to find out how much of a threat it really is.

This represents the second device from Motorola to come out of the box with Android 4.0 Ice Cream Sandwich, and on-screen navigation keys here in the US. The device rocks some of the better hardware available (screen aside) but sadly the network is quite slow and their “4G LTE” is still nowhere to be seen. Lets take a look shall we?

Hardware
To start with the hardware we’ll run down the specs, then go into more details after our hands-on video. The Motorola PHOTON Q 4G LTE comes with near top of the line specs, but falls short in a few places. The screen is 4.3-inches and rocks Moto’s Colorboost technology but sadly is only 960 x 540 qHD resolution, no 720p here. Other than that the rest of the specs are top-tier. It’s powered by Qualcomm’s Snapdragon S4 1.5 GHz dual-core processor (Just like the Galaxy S III) has 1GB of RAM, 8GB of internal storage (and micro-SD slot), an 8 megapixel rear camera capable of 1080p video, 1.3 front for video chatting. Take a peek below:

Then obviously we have that spacious and comfy 5-row QWERTY keyboard that also manages to be edge-lit for dark situations. The DROID 4’s was also edge-lit but they lights only came on as needed. With the PHOTON Q the key lights are always lit up. The keyboard is extremely easy to work with, and get use to — I just wish there was an Android home button on it. In comparison to the previous PHOTON, the new Q didn’t get much thinner, didn’t get a quad-core processor, and lost its kickstand in favor for a non-removable back and battery. Those last two are serious cons if you ask us — just saying!

To round off the specs we get a dedicated camera button, HDMI-out for accessories, and a mediocre 1785 mAh battery. Motorola has always had better than average build quality with their hardware. It looks good, feels good, has a durable construction and more. That also means it’s quite heavy though. The vibration haptic feedback seems to rattle the keyboard area giving it a cheap feeling, but it’s no where near a cheap device. The combined soft and hard plastic design is odd and feels rather different, but we liked the overall feel during usage. The last thing we wanted to mention of the hardware is Motorola added a LED for notifications. It doesn’t light up while charging oddly, but does notify users of pending notifications and is rather bright. Green is the only color we’ve seen. 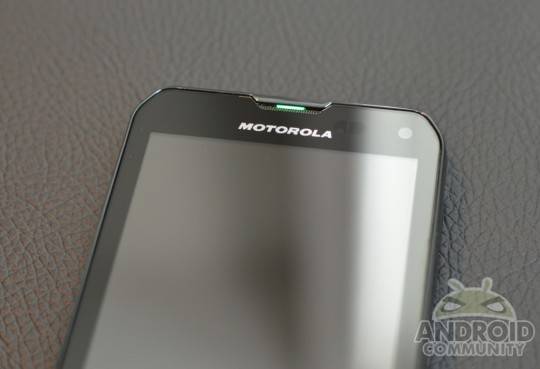 Software
Running on Android 4.0.4 Ice Cream Sandwich you have nearly the latest and greatest Android OS, and surely it will receive Jelly Bean sometime in the future. Motorola’s been bringing some uniqueness to Android with smart actions, and now we have their clock/weather Circle Widget that I love, as well as a new way to set up homescreens. You won’t have 5-7 out of the box, and instead when you swipe to the side you’ll be greeted with options to set up additional screens. It’s a different approach, but we like the thought. 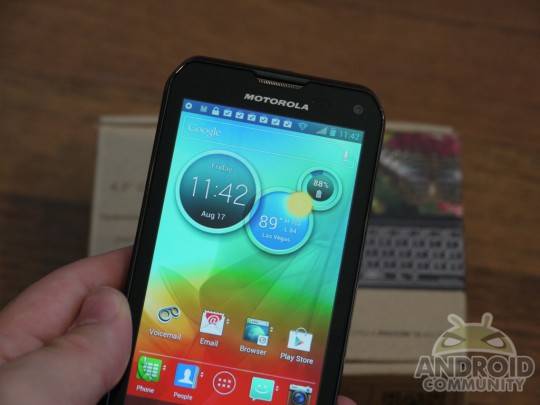 As usual Motorola’s webtop software is present, as well as the micro-USB/HDMI ports for their multiple accessories. The PHOTON Q 4G LTE will work with their desk dock, HD dock, and Lapdock computer accessories all with ease. Their HD dock we’ve seen before but as usual it is also available and compatible with the PHOTON Q 4G LTE, and we suggest those in need check it out. It’s made to be universal with future purchases too. 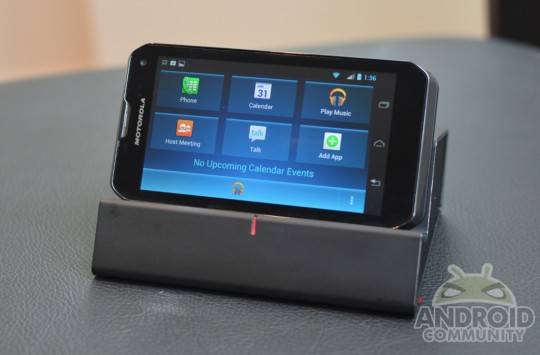 Motorola has continued to improve on their OS now that they’ve ditched their BLUR UI, and Android 4.0 ICS looks rather simple and pretty. Instead of changing everything it’s more of a skin than a complete overhaul. Hopefully Google continues to rub off on Motorola.

Performance
Performance was stellar as expected. Running on the same 1.5 GHz dual-core Qualcomm S4 processor as the Galaxy S III, HTC One X (AT&T) and others yet having the smallest screen of them all we knew it would perform well. Quadrant results were impressive passing the 5,000 mark with memory and IO results scoring quite well. This mirrored daily usage of fast speeds, quick navigation, and a smooth experience. AnTuTu wasn’t as nice giving it a lower score than even the old Galaxy S II.

Speedtest and 4G LTE
Sadly we must mention this because such a big selling part is the 4G LTE — which by the way is basically non existent for most of the US. Once the carrier gets up and running with their LTE this will be different, but for now their 3G is still dead slow. The Now Network 3G is still amazingly slow and until 4G LTE arrives this phone will crawl with browsing the web, app updates and more. I was constantly searching for WiFi all week. Once 4G LTE launches in more cities we’ll revisit these tests. 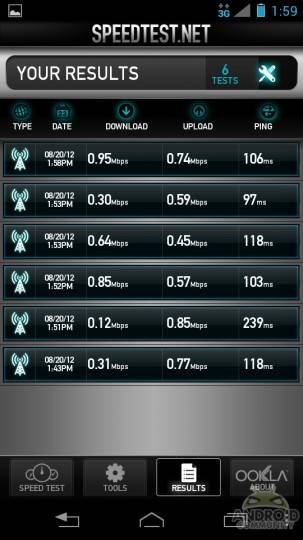 Even 3G was hard to come by in terms of a good, stable, and fast connection. With Verizon and AT&T both far ahead with 4G LTE the light is starting to dim here — but hopefully they pull it together. T-Mobile is catching up and launching their LTE next year too.

Camera and Battery Life
The camera is one area I can say Motorola has made significant improvement. Their previous phones like the dreadful DROID Bionic had some rather terrible cameras. While this still doesn’t compete with the Galaxy S III or HTC One X the 8 megapixel sensor is decent. Shutter speed has always been a problem but not anymore. The PHOTON Q 4G LTE was quite fast, and pictures were decent during daily usage. You’ll have no problems getting a good shot. Here’s a few samples:

Next up is battery life. Sadly Motorola pulled a bad move and discarded the popular kickstand while also making the rear of the device non-removable. You can’t take off the back to access the battery, and it’s only 1785 mAh. Having the efficient S4 dual-core and a smaller non HD screen made battery life better than the average device these days, and we averaged well over 13 hours of solid usage. Enough for a days work. 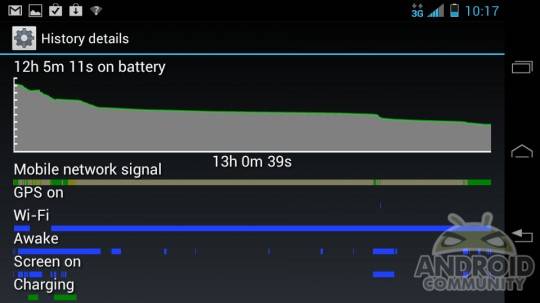 Wrap-Up
In the end the Motorola PHOTON Q 4G LTE is a great piece of hardware. The keyboard isn’t quite “PC-like” as they call it, but certainly one of the best keyboards on a phone we’ve used in a while. The screen isn’t HD but has great colors and brightness so that’s a plus. We wouldn’t really call this a triple threat but for those on the Now Network this is certainly one to consider — especially if you like the hardware keyboard. 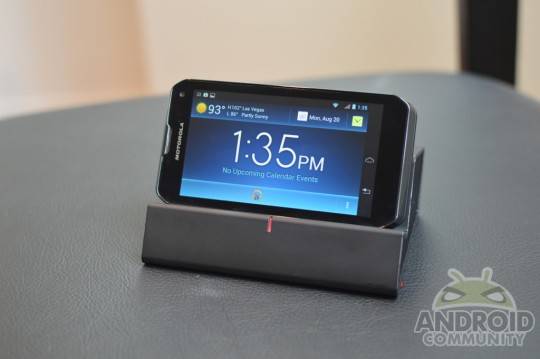 Sadly the network is still no where near being up to par, especially with 2012 standards. Call quality was great, but data is another story. As a phone calls were clear, crisp, and rarely dropped and the speaker phone is amazingly loud on this device. Once the 4G LTE becomes a reality this phone will be a good option for the many who love a keyboard. As an added bonus this is the first smartphone from Motorola that can officially be unlocked. You can unlock its bootloader with their Unlock My Device website. The new Motorola PHOTON Q 4G LTE is available today starting at $199 with a new 2-year contract. If you love a keyboard and are willing to wait for 4G LTE go pick one up today!