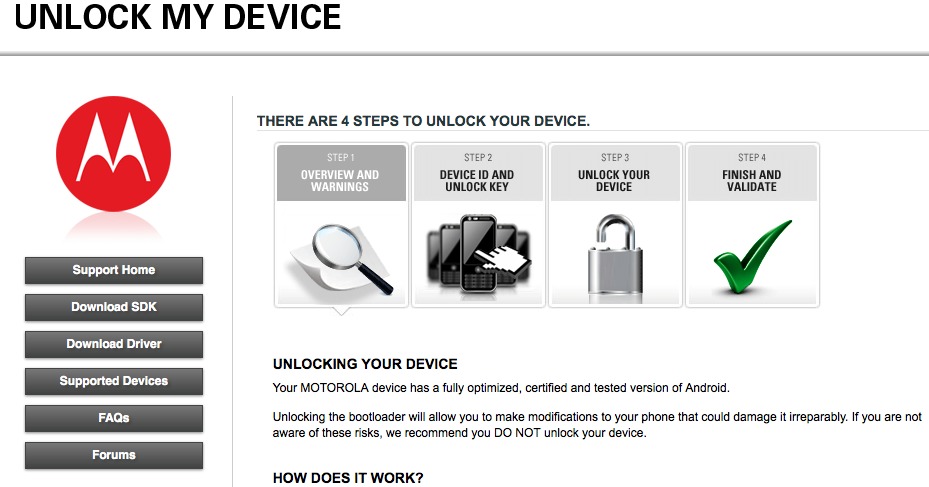 It’s about time! Today Motorola has finally launched their initiative to allow Android users the option to unlock the bootloader on their smartphones. We’ve been waiting for this to come for well over a year, and today they’ve finally started the process. Motorola has just launched their Unlock My Device website although there’s currently no supported devices.

Just like HTC before them, and ASUS, Motorola will now be allowing users to unlock their bootloader and have full control of their smartphones and tablets. This will allow 3rd party software, custom ROM’s and many other exciting things. Just like ASUS, Motorola will be opting for a PC program that will safely and easily unlock the device.

To start you’ll go through a few hundred warnings and be told you will void your warranty, then that will be followed probably by more warnings. Motorola will then issue a device id and unlock key, using the Android SDK and Motorola drivers you’ll then be able to fully unlock your phone. Yay!

The software will verify and validate the process and you’ll be off and running to your nearest ROM developer to download Android 4.1 Jelly Bean or CyanogenMod 10. Motorola has offered up a supported devices list that sadly doesn’t appear to be working. Once you sign up and try to check you’ll be greeted with an error. It’s safe to say they are getting all the pieces into place, and will add devices throughout the weekend. Great news guys. We can finally enjoy some of the best Android hardware without Motorola’s terrible software. The PHOTON Q 4G LTE will be the first device to support bootloader unlocking, and hopefully the RAZR HD will soon follow. We’ll update when we know more.