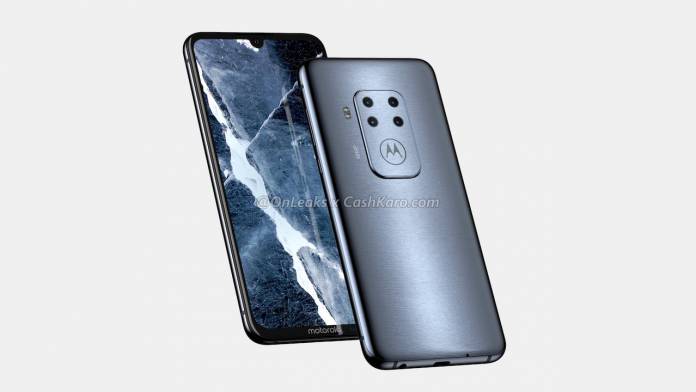 Making your concept into reality used to be THE goal. Now, turning those ideas into image renders may just be enough. That is what’s been happening the past few months especially since Steve Hemmerstoffer aka OnLeaks accommodates such requests to come up with renders of upcoming smartphones. The latest set involves a mysterious Motorola phone. It could be the Moto G8 or a totally new phone series. We don’t think it will be from the Motorola One lineup though because of the multiple cameras.

That one has got a triple rear camera system. Three cameras are already impressive so a quad camera setup sounds like a dream. Not that it’s a new idea but we know Motorola isn’t really aggressive when it comes to specs and innovations. The OEM is usually conservative when it comes to implementing new technologies.

Rumor has it Motorola is working on two premium phones. We’re assuming the next-gen Moto G8 is one and then this one that comes with a waterdrop notch similar to the OnePlus 6, a large 6.2-inch screen, in-display fingerprint sensor, 158.7 x 75 x 8.8mm dimensions, USB-C port for charging and data transfer, 3.5mm audio jack, and a SIM card tray and speakers on the upper frame.

The bezels are still a bit obvious especially the forehead and the chin. Motorola could probably consider the camera hole screen design if it wants a bigger screen real estate. The camera system at the back looks like a domino tile smacked in the upper middle part of the rear side. The Motorola logo is still there but we’re assuming there is no fingerprint sensor embedded.

We don’t think this is a new Moto X series because Motorola is about to discontinue it. Could this new phone with four rear cameras be the next premium flagship that would rival the Samsung Galaxy S10 or Huawei P30 Pro? Let’s wait and see.