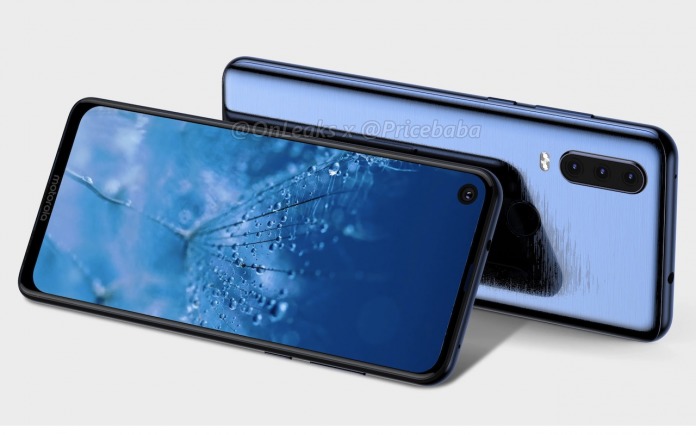 It is not always too early for rumors, leaks, and renders to be released but this set of Moto G8 comes very early since the Moto G7 series was only unveiled a few weeks ago. Usually, talks about the next-gen Moto G phone are out around the last quarter of this year but the Moto G8 is different. Well, they are only renders anyway so there’s no stopping our sources like Pricebaba and OnLeaks for showing off the images below.

The Motorola Moto G8 is the Moto G7’s successor. It is said to arrive with three rear cameras, making it the first from the brand to implement a triple camera design.

The image renders provided are in 5k. The 360-degree video render gives us a glimpse of the possible features and functions. The specs provided are only estimates.

The Moto G8 is said to be more similar to the Motorola One series particularly the Moto P40. The triple 12MP rear camera setup seems special but that’s not the only great feature. Motorola is said to use the punch-hole display design to achieve a bezel-less screen–well, almost.

The images still show some bezels but we believe Motorola is on the right track. The 6.2-inch screen is large enough with HD+ resolution. The bezels are still obvious but dimensions are said to be 160.1 x 71.2 x 9.1mm.

The Moto G8 shows a loudspeaker grill, mic, SB Type-C port, volume rocker, power button, a rear fingerprint scanner, and a 3.5mm audio jack. Other possible specs we believe the Moto G8 may have: Qualcomm Snapdragon 675 processor, 6GB of RAM, and 64GB or 128GB onboard storage.

If this is the Moto G8, then we can expect a Moto G8 Play and Moto G8 Plus. A Moto G8 Power can also be available so let’s wait and see.

Here comes your very first look at #Motorola first triple camera phone which I guess will be launched as the #MotoG7 successor and thus, as the #MotoG8 (TBC). 360° video + gorgeous 5K renders + dimensions + few specs, on behalf of my Friends @Pricebaba -> https://t.co/OUmlkuUxEQ pic.twitter.com/Nwc2vwaimO